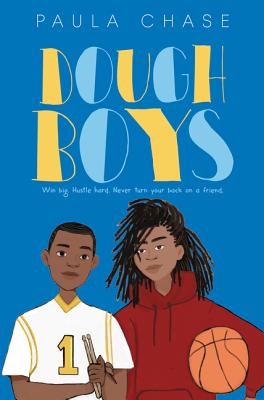 “In this follow-up to SO DONE, Paula Chase explores the unraveling friendship of two middle school boys, Rollie and Simp. This unsparing but tender novel takes the reader down some dangerous streets even as it reveals a hopeful world beyond. Chase’s writing pops off the page. I loved DOUGH BOYS!” — -Barbara Dee, Author of Everything I Know About You

“This companion novel to So Done features best friends Rollie Matthews and Simp Wright, whose middle-school basketball coach has begun grooming them to become drug lookout boys. . . . Fans . . . will love the various cameos of familiar characters, but there’s universal appeal . . . in this bittersweet look at friendship in the hood.” — Booklist

“[Chase] imbues her writing with style and phraseology that paint a vivid picture of this distinct world and the young Black teens who feel the weight of it upon their shoulders. Relatively hopeful endings for both boys . . . wrap up a smart and stirring take on growing up and apart.” — Bulletin of the Center for Children’s Books

“The definitions of bravery and commitment are put to the test for the middle-school duo, as the boys determine where their true loyalties lie. The alternating third-person narratives pull no punches linguistically. . . . Fans of Jason Reynolds and Angie Thomas will enjoy this rough and relatable read, whose conclusion provides no easy answers.” — Horn Book Magazine