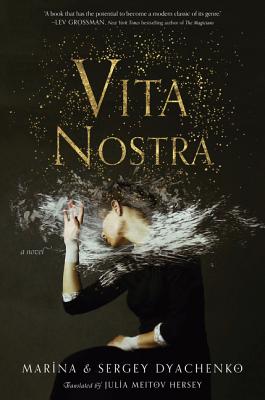 “Vita Nostra” — a cross between Lev Grossman’s “The Magicians” and Elizabeth Kostova’s “The Historian” [...] is the anti-Harry Potter you didn’t know you wanted.” — Washington Post

“Amazing book. Dark Harry Potter on steroids with a hefty dose of metaphysics.” — Aliette de Bodard, award-winning author of The Tea Master and the Detective

“Vita Nostra has become a powerful influence on my own writing. It’s a book that has the potential to become a modern classic of its genre, and I couldn’t be more excited to see it get the global audience in English it so richly deserves.” — Lev Grossman, New York Times bestselling author of The Magicians

“Vita Nostra is utterly fascinating. It’s like a drug; the more you read, the more you have to read. A unique premise, mind-blowing magic system, and spellbinding conclusion makes this one of the best reads of the year.” — Charlie Holmberg, bestselling author of The Paper Magician

“Vita Nostra takes the trope of young people selected for a school for magic and transforms it into an unnerving, deeply philosophical coming-of-age tale. [...] Hersey’s translation is plain and straightforward, a wise choice that enhances the deep strangeness of this trippy, vivid novel.” — Publishers Weekly (starred review)

“Imagine that Hogwarts has opened a satellite campus inside Harry Haller’s Magic Theater from Steppenwolf by Hermann Hesse, and assigned Kafka, Dostoevsky and Rod Serling to oversee the curriculum.” — BookPage

“Vita Nostra reminds us that language and knowledge are the greatest powers, and it’s through the word that we’ve shaped everything around us.” — Paste Magazine (Best Books of November 2018)

“Vita Nostra is a dark, enthralling fantasy quite unlike any other. . . .  One part coming of age tale, one part contemporary magic school, and a sizable part dark reality, Vita Nostra is a beautiful, aching, nearly debilitating fantasy that bruises, and thrills, the heart.” — New York Journal of Books

“Dark and foreboding, this fantasy, translated from Russian, is more of philosophical treatise on growing up and the nature of reality than an adventure tale. Readers willing to challenge themselves and slowly digest this deep book will enjoy it immensely.” — Booklist

“The Dyachenkos have produced a remarkable novel and one that will linger long afterward in the reader’s thoughts.” — PopMatters

“This goes magnificently into an adult direction that will blow the reader’s mind. It twists and turns between wonders and horrors, taking a reader on a magical, psychological trip that won’t be forgotten.” — Scifi Pulse

“It is a thought-provoking, twisting tale that has highs and lows, unlike anything that most U.S. readers will have experienced. It is brilliant and well worth the time.” — SFRevu