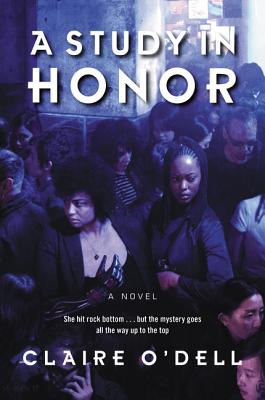 A Study in Honor

Winner of the Lambda Literary Award in Lesbian Mystery

A Paste Magazine’s Most Anticipated 25 books of 2018 pick

Set in a near future Washington, D.C., a clever, incisive, and fresh feminist twist on a classic literary icon—Sherlock Holmes—in which Dr. Janet Watson and covert agent Sara Holmes will use espionage, advanced technology, and the power of deduction to unmask a murderer targeting Civil War veterans.

Dr. Janet Watson knows firsthand the horrifying cost of a divided nation. While treating broken soldiers on the battlefields of the New Civil War, a sniper’s bullet shattered her arm and ended her career. Honorably discharged and struggling with the semi-functional mechanical arm that replaced the limb she lost, she returns to the nation’s capital, a bleak, edgy city in the throes of a fraught presidential election. Homeless and jobless, Watson is uncertain of the future when she meets another black and queer woman, Sara Holmes, a mysterious yet playfully challenging covert agent who offers the doctor a place to stay.

Watson’s readjustment to civilian life is complicated by the infuriating antics of her strange new roommate. But the tensions between them dissolve when Watson discovers that soldiers from the New Civil War have begun dying one by one—and that the deaths may be the tip of something far more dangerous, involving the pharmaceutical industry and even the looming election. Joining forces, Watson and Holmes embark on a thrilling investigation to solve the mystery—and secure justice for these fallen soldiers.


Praise For A Study in Honor: A Novel (The Janet Watson Chronicles)…

“O’Dell’s prose is sharp and clean, rising at times to the poetic, and her near-future Washington DC feels like a real city. The USA of A Study in Honor is a place with deep political divisions, and some of that comes into play in this story. It feels appropriately complicated as a future, and not a simplistic future vision of now.” — Locus Magazine

“Readers who pick this up for the novelty of Watson and Holmes as black women will be impressed by how well O’Dell realizes them as full, rich characters. This is a real treat for fans of Conan Doyle and SF mysteries.” — Publishers Weekly

“If you like dystopian future narratives, queer romance, and Sherlock Holmes, you’ll adore A Study in Honor.” — LitHub

“In this intriguing and fresh twist on the Sherlock Holmes mythos, O’Dell brings a heady mix of dystopian sf and strong female protagonists in the first of a new series.” — Library Journal

“I may be a sucker for a good Dr. Watson, or maybe Claire O’Dell (an open pseudonym for Beth Bernobich) has just written a hell of a good novel, because A Study in Honor turns out to be one of those books I find impossible to put down. I want the sequel immediately.” — Tor.com

“A gritty, fast-paced investigation with a memorable and compelling duo of main characters. I can’t wait to see what Janet and Sara get up to next.”   — Aliette de Bodard, Nebula-award winning author of The House of Binding Thorns and The Tea Master and the Detective

“A Study in Honor is a fast-moving, diverse science-fictional Holmes and Watson reinterpretation set in near future Washington DC. As a deliciously intersectional makeover of a famous literary duo it’s enormously satisfying. Clean, clear, and vastly enjoyable.” — Nicola Griffith, Lambda Literary award-winning author of So Lucky

“An entertaining and empathetic dystopian procedural that navigates the capital of an America at war with itself, tracking the path to recovery from personal and national trauma.” — Christopher Brown, author of Tropic of Kansas