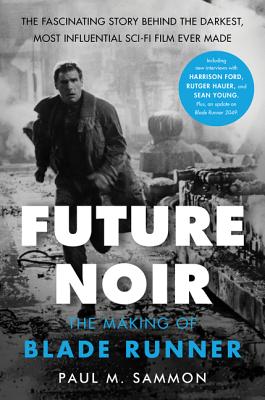 The Making of Blade Runner

Rediscover the groundbreaking magic of Blade Runner with this revised and updated edition of the classic guide to Ridley Scott’s transformative film—and published in anticipation of its sequel, Blade Runner 2049, premiering October 2017 and starring Ryan Gosling, Jared Leto, Robin Wright, and Harrison Ford.

Ridley Scott’s 1992 "Director’s Cut" confirmed the international film cognoscenti’s judgment: Blade Runner, based on Philip K. Dick’s brilliant and troubling science fiction masterpiece Do Androids Dream of Electric Sheep?, is the most visually dense, thematically challenging, and influential science fiction film ever made. Future Noir offers a deeper understanding of this cult phenomenon that is storytelling and visual filmmaking at its best.

In this intensive, intimate and anything-but-glamorous behind-the-scenes account, film insider and cinephile Paul M. Sammon explores how Ridley Scott purposefully used his creative genius to transform the work of science fiction’s most uncompromising author into a critical sensation, a commercial success, and a cult classic that would reinvent the genre. Sammon reveals how the making of the original Blade Runner was a seven-year odyssey that would test the stamina and the imagination of writers, producers, special effects wizards, and the most innovative art directors and set designers in the industry at the time it was made. This revised and expanded edition of Future Noir includes:

A fascinating look at the ever-shifting interface between commerce and art, illustrated with production photos and stills, Future Noir provides an eye-opening and enduring look at modern moviemaking, the business of Hollywood, and one of the greatest films of all time.

As a writer, Sammon has published numerous articles, short stories and books. His many film journalism pieces have seen print in The American Cinematographer, Cahiers du Cinema, The Los Angeles Times, Omni, Cinefex, and Cinefantastique. Sammon's fiction has appeared in Peter Straub's Ghosts (1995), and he recently edited both the 1994 "dead Elvis" anthology The King Is Dead plus the "no limits" anthologies Splatterpunks: Extreme Horror and Splatterpunks II: Over the Edge (1995).

But Paul M. Sammon does not only write about movies--he works in them as well. He first entered the industry as a publicist in the late 1970s, before moving on as a second-unit director, special effects coordinator, still photographer, electronic press kit producer, and Vice President of Special Promotions. Some of the scores of motion pictures on which Sammon has labored include RoboCop, Platoon, Blue Velvet, Conan the Barbarian, and The Silence of the Lambs.

By the late 1980s, Sammon was working in Japanese television, where he coproduced popular entertainment programs like Hello! Movies for the TV Asahi network. By the 1990s, Sammon had served as Computer Graphics Supervisor for RoboCop 2; he recently was Digital and Optical Effects Supervisor for 1995's XTRO: Watch the Skies.

Despite this background, however, Sammon still likes nothing better than sitting down with a good movie. And Blade Runner remains one of his favorite films.