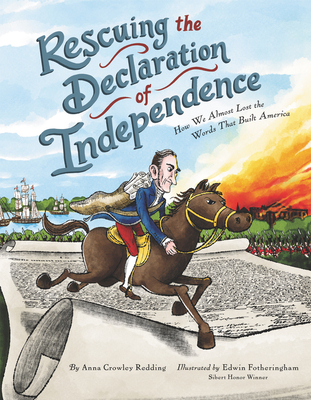 Rescuing the Declaration of Independence

How We Almost Lost the Words That Built America

He saved the words that built America! Emmy Award–winning journalist Anna Crowley Redding and Sibert Honor illustrator Edwin Fotheringham bring to life the riveting true story about the lowly clerk who saved the Declaration of Independence from being destroyed by the British army in the War of 1812. This nonfiction picture book is an excellent choice to share during homeschooling, in particular for children ages 4 to 6. It’s a fun way to learn to read and as a supplement for activity books for children.

“We hold these truths to be self-evident, that all men are created equal, that they are endowed by their Creator with certain unalienable Rights, that among these are Life, Liberty and the pursuit of Happiness.”

These are the words that helped found our nation. Today the Declaration of Independence is one of the United States’ most heavily guarded treasures, but during the War of 1812 it would have been destroyed if not for one man whose story has nearly been forgotten by time. Come along on this historic adventure and learn how one ordinary clerk did a truly extraordinary thing.

As a clerk for the State Department, Stephen Pleasonton spent his days quietly immersed in paperwork. He never expected to receive an urgent message telling him that the British army was on its way to the capital. And that the documents that Stephen was entrusted with—such as the original Declaration of Independence and the original Constitution—were all in danger!

It fell on Stephen to get our nation’s most cherished and priceless artifacts safely out of Washington!


Praise For Rescuing the Declaration of Independence: How We Almost Lost the Words That Built America…

"Fotheringham’s (Most Wanted) action-packed illustrations, hand-drawn and digitally rendered, bring to life a little-known piece of United States history...Redding (Google It) imbues her often-alliterative narration with a sense of urgency, echoed in the artwork, as Pleasanton works to save original manuscripts such as the U.S. Constitution and the Declaration of Independence. Nearly every spread features exigent motion, whether a galloping horse or Pleasonton running."  — Publishers Weekly

“At its heart, Rescuing the Declaration of Independence is an action movie with a famous star (the documents). You can talk to your kids about whether or not a physical object like a Constitution needs to be preserved and visited or if its merits are found in different ways. And for folks that want to give their teaching of the War of 1812 a more interesting hook.” — School Library Journal

“The narrative propels readers forward and is complimented by Fotheringham’s playful, digitally rendered illustrations…this picture book is a unique tale of heroism by an ordinary and relatively unknown clerk. A welcome addition to history shelves.” — School Library Journal

"Budding historians as well as those unfamiliar with history will both enjoy this pleasant, fast-moving selection."  — Kirkus Reviews

“This rollicking tale gives a nice sense of the time period. It also emphasizes how the actions of a less-than-famous but determined individual can have great effect and demonstrates that each person's role in history—even one that focuses on packing up government files and papers—is important. Budding historians as well as those unfamiliar with history will both enjoy this pleasant, fast-moving selection.”

Edwin Fotheringham is the award-winning illustrator of numerous books for kids, including What to Do About Alice?, recipient of both a Sibert Honor and a Boston Globe–Horn Book Award Honor; The Extraordinary Mark Twain (According to Susy); Those Rebels, John & Tom; and Thomas Paine and the Dangerous Word. He lives with his family in Seattle, Washington. You can visit him at www.edfotheringham.com.