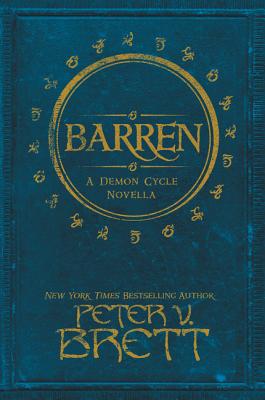 Each night, the world is overrun by bloodthirsty demons. For centuries, humanity survived only by hiding behind defensive wards—magical symbols with the power to repel the demons. Now, the rediscovery of long-forgotten combat wards has given them the magic they need to fight back.

In Tibbet’s Brook, the fighting wards have brought change, but the factions and grudges of a troubled past remain. Selia Square, the woman they call Barren, has long been the force that holds the Brook together. As a terrifying new threat emerges, she rallies her people once again.

But Selia has a past of her own. And in a small community the personal and the political can never be divided. If Tibbet’s Brook is to survive, Selia must uncover memories she has buried deep—the woman she once was, the woman she once loved—and retell their story.

“Peter V. Brett is one of my favorite new authors.”
— Patrick Rothfuss

“[Barren] perfectly showcases Brett’s skill at creating an immersive fantasy world. Readers will be drawn into the hearts and minds of his characters and deeply moved by the themes of acceptance and community.”
— Publishers Weekly

“Thoroughly addicting . . . a thrilling adventure that is, without question, [Brett’s] greatest achievement yet.”
— Bookreporter on The Core

“There is much to admire in Peter Brett’s writing, and his concept is brilliant. There’s action and suspense all the way.”
— Terry Brooks on The Warded Man

“Fans of epic fantasy in the tradition of Robert Jordan and George R. R. Martin will enjoy the arrival of a strong voice in multivolume epic fantasy.”
— Library Journal on The Desert Spear

“Heart-thumping, adrenaline-pumping . . . The crescendo is near perfect.”
— Book Frivolity on The Skull Throne

Peter V. Brett is the bestselling author of the Demon Cycle series—including The Warded Man, The Desert Spear, The Daylight War, The Skull Throne, and The Core—which has sold over two and a half million copies in twenty-five languages worldwide. He spends too much time on the internet, but occasionally unplugs to practice kickboxing and dad fu. He lives in Manhattan.