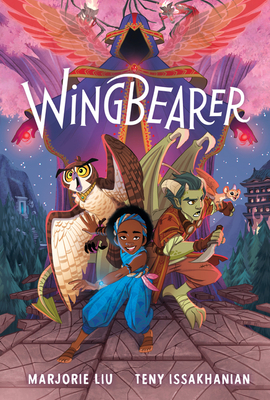 “Prepare yourself for an adventure! Marjorie Liu and Teny Issakhanian have built a world full of forgotten history and magic rediscovered. Zuli's heroic quest for hope, truth, and identity is perfect for fans of The Hobbit and Amulet.”
— Gibran Graham, The Briar Patch, Bangor, ME
View the List

A young girl must stop a threat to her magical world in this epic graphic novel from New York Times bestselling author Marjorie Liu and remarkable debut illustrator Teny Issakhanian.

Zuli is extraordinary—she just doesn’t realize it yet. Raised by mystical bird spirits in the branches of the Great Tree, she’s never ventured beyond this safe haven. She’s never had to. Until now.

When a sinister force threatens the life-giving magic of the tree, Zuli, along with her guardian owl, Frowly, must get to the root of it. So begins an adventure bigger than anything Zuli could’ve ever imagined—one that will bring her, along with some newfound friends, face-to-face with an ancient dragon, the so-called Witch-Queen, and most surprisingly of all: her true identity.

This captivating middle grade graphic novel, the first of a series, is perfect for fans of the Amulet books and the Wings of Fire series.

“This fantasy graphic novel hits all the right notes of excitement, danger, and cool magical elements in one short volume.” — Bulletin of the Center for Children’s Books

Teny Issakhanian is an Armenian American illustrator, building worlds and stories as a storyboard artist and visual development artist in the entertainment industry. She has worked on a multitude of shows at animation studios including Walt Disney Animation Studios, DreamWorks Animation Television, Disney Television Animation, and the Jim Henson Company. Teny graduated from the University of California, Berkeley, and the ArtCenter College of Design. She is based in Los Angeles.