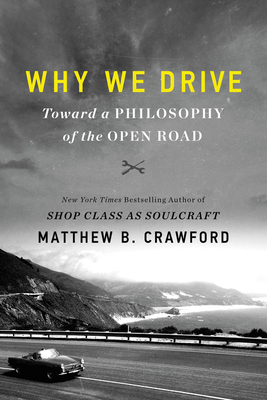 Toward a Philosophy of the Open Road

A brilliant and defiant celebration of driving as a unique pathway of human freedom, by "one of the most influential thinkers of our time" (Sunday Times)

"Why We Drive weaves philosophers, thinkers, and scientific research with shade-tree mechanics and racers to defend our right to independence, making the case that freedom of motion is essential to who we are as a species. ... We hope you'll read it." —Road & Track

Once we were drivers, the open road alive with autonomy, adventure, danger, trust, and speed. Today we are as likely to be in the back seat of an Uber as behind the wheel ourselves. Tech giants are hurling us toward a shiny, happy “self-driving” future, selling utopia but equally keen to advertise to a captive audience strapped into another expensive device. Are we destined, then, to become passengers, not drivers? Why We Drive reveals that much more may be at stake than we might think.

Ten years ago, in the New York Times-bestselling Shop Class as Soulcraft, philosopher-mechanic Matthew B. Crawford—a University of Chicago PhD who owned his own motorcycle shop—made a revolutionary case for manual labor, one that ran headlong against the pretentions of white-collar office work. Now, using driving as a window through which to view the broader changes wrought by technology on all aspects of contemporary life, Crawford investigates the driver’s seat as one of the few remaining domains of skill, exploration, play—and freedom.

Blending philosophy and hands-on storytelling, Crawford grounds the narrative in his own experience in the garage and behind the wheel, recounting his decade-long restoration of a vintage Volkswagen as well as his journeys to thriving automotive subcultures across the country. Crawford leads us on an irreverent but deeply considered inquiry into the power of faceless bureaucracies, the importance of questioning mindless rules, and the battle for democratic self-determination against the surveillance capitalists. A meditation on the competence of ordinary people, Why We Drive explores the genius of our everyday practices on the road, the rewards of “folk engineering,” and the existential value of occasionally being scared shitless.

Witty and ingenious throughout, Why We Drive is a rebellious and daring celebration of the irrepressible human spirit.


Praise For Why We Drive: Toward a Philosophy of the Open Road…

"A thoughtful, entertaining and substantive work about the joys of driving—and about the attempts by various scolds to relegate that joy, and similar expressions of independence." — Wall Street Journal

"Crawford writes ecstatically of driving, evoking the sense of release and agency of flooring it out of the city as “a shady country road reels out ahead in rhythmic curves.” ... But Why We Drive is about driving like Moby-Dick is about whaling.  ... Crawford has something important to say." — San Francisco Chronicle

"Matthew Crawford’s heartfelt riposte to a ‘smart’ future of driverless cars is persuasive and thought-provoking. ... A vivid and heartfelt manifesto against the drift of our world, against the loss of individual agency and the human pleasure of acquired skill and calculated risk." — The Guardian

"A pleasure to read ... His thesis demands that he convey the pleasure of driving, and he's up to the task ... And he addresses some huge, fascinating issues: how people retain self-respect when computers are deskilling them, and sovereignty over their lives when computers are spying on them. Much of modern life raises these questions, but people's relationship with their cars perhaps best exemplifies them ... an enjoyable, scenic cruise round a fascinating landscape."
— Sunday Times (London)

"One of the most original and mind-opening studies of practical philosophy to have appeared for many years." — John Gray, UnHerd

"Absorbing. ... Why We Drive is about a freedom that is being lost to the cynics of surveillance.. ... A defense of felt life against the intrusions of the technocrats. ... Plain funny. — New Statesman

"A pleasure to read ... Addresses some huge, fascinating issues: how people retain self-respect when computers are deskilling them, and sovereignty over their lives when computers are spying on them. Much of modern life raises these questions, but people's relationship with their cars perhaps best exemplifies them ... An enjoyable, scenic cruise round a fascinating landscape." — Sunday Times (London)

"A biographical, philosophical inquiry that explores a fascinating paradox: the whole allure of driving is freedom, but it's also dangerous, so it has to be regulated. ... This is a lovely book that applies history, philosophy and literature to one obsessive subject." — Telegraph (UK)

"Fascinating... Crawford skilfully takes us through the gears as he intelligently, and in a very American way, flies the flag for individualism over dour corporative determinism." — Mail on Sunday

“Crawford artfully argues … the case that freedom of motion is essential to who we are as a species. … This book is a celebration of humanity and what we’re capable of with the right tools. And what is a car but a finely evolved instrument? We hope you read it.” — Road and Track

"A passionate appeal to the importance of the autonomous individual in the face of the dehumanizing pressure of automation. ... This book will have you pining for the freedom the open road." — Kirkus Reviews

Matthew B. Crawford is the author of Shop Class as Soulcraft and The World Beyond Your Head. He is a senior fellow at the University of Virginia’s Institute for Advanced Studies in Culture. He earned a PhD in Political Philosophy from the University of Chicago, specializing in ancient political thought; he majored in physics as an undergraduate at UC Santa Barbara. Crawford has been working on cars since the age of fifteen and currently drives a 1970 Volkswagen Karmann Ghia.