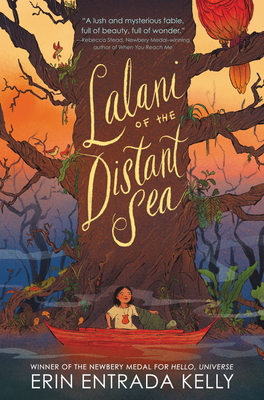 Lalani of the Distant Sea

“Lalani of the Distant Sea is exquisitely written from many different perspectives, focusing mainly on that of Lalani, a young girl who will do anything to protect her people — her mother and friends most of all. Erin Entrada Kelly speaks through this lovely story, telling us that within sorrow, strength can be found, and in ruin, paradise can be discovered by those willing to search for it.”
— Cassie Molitor, The Book Shoppe, Boone, IA
View the List

“Fast-paced and full of wonder, this is a powerful, gripping must-read.”—Kirkus (starred review)

“A lush and mysterious fable, full of beauty, full of wonder.”—Rebecca Stead, Newbery Medal–winning author of When You Reach Me

Newbery Medalist Erin Entrada Kelly’s debut fantasy novel is a gorgeous, literary adventure about bravery, friendship, self-reliance, and the choice between accepting fate or forging your own path.

When Lalani Sarita’s mother falls ill with an incurable disease, Lalani embarks on a dangerous journey across the sea in the hope of safeguarding her own future. Inspired by Filipino folklore, this engrossing fantasy is for readers who loved Grace Lin’s Where the Mountain Meets the Moon and Disney’s Moana.

Life is difficult on the island of Sanlagita. To the west looms a vengeful mountain, one that threatens to collapse and bury the village at any moment. To the north, a dangerous fog swallows sailors who dare to venture out, looking for a more hospitable land. And what does the future hold for young girls? Chores and more chores.

When Lalani Sarita’s mother falls gravely ill, twelve-year-old Lalani faces an impossible task—she must leave Sanlagita and find the riches of the legendary Mount Isa, which towers on an island to the north. But generations of men and boys have died on the same quest—how can an ordinary girl survive the epic tests of the archipelago? And how will she manage without Veyda, her best friend?

Newbery Medalist and New York Times–bestselling author Erin Entrada Kelly’s debut fantasy novel is inspired by Filipino folklore and is an unforgettable coming-of-age story about friendship, courage, and identity. Perfect for fans of Lauren Wolk’s Beyond the Bright Sea and Kelly Barnhill’s The Girl Who Drank the Moon.


Praise For Lalani of the Distant Sea…

“A lush and mysterious fable, full of beauty, full of wonder.” — —Rebecca Stead, Newbery Medal-winning author of When You Reach Me

“With lyricism and elegance, Erin Entrada Kelly weaves a rich tale. Powerful and gripping.” — Soman Chainani, author of The School for Good and Evil series

“Unlikely but determined heroine Lalani is lovably loyal, kind-hearted, and optimistic even as she faces unspeakable dangers, and her relentless spirit makes her a worthy protagonist in this triumphant tale about fighting for the people one loves and staying true to oneself.” — Publishers Weekly (starred review)

“Newbery Medalist Kelly writes a heroic fantasy about making choices, going on a quest, and conquering evil. Scattered throughout the novel are short, beautifully illustrated second-person vignettes allowing readers to imagine they are the mythical creatures Lalani encounters . . . Fast-paced and full of wonder, this is a powerful, gripping must-read.” — Kirkus Reviews (starred review)

“Inspired by Filipino folklore, Newbery Award̶winner Kelly has woven her narrative with a mythology that is rich and delicious. . . . Readers will be cheering for Lalani in her unlikely quest to save her family and friends, using only the power of her wits, courage, and empathy.” — Booklist (starred review)

“Beautifully rendered . . . A journey illustrating the importance of story and the power of faith and hope.”
— School Library Journal (starred review)

“Fans of Lin’s Where the Mountain Meets the Moon will be enthralled.” — Bulletin of the Center for Children’s Books

“Kelly turns from the contemporary realistic settings of the Newbery–winning Hello, Universe and of You Go First to a tropical island–set fantasy world. . . . An excellent job of world-building.”  — Horn Book (starred review)