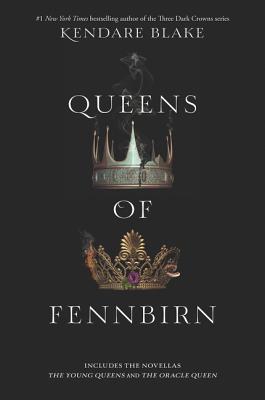 Together in print for the first time in this paperback bind-up, the dazzling prequels to the Three Dark Crowns series are finally available for fans to have and to (literally) hold. Uncover the sisters’ origins, dive deep into the catastrophic reign of the Oracle Queen, and reveal layers of Fennbirn’s past, hidden until now.

Get a glimpse of triplet queens Mirabella, Arsinoe, and Katharine during a short period of time when they protected and loved one another. From birth until their claiming ceremonies, this is the story of the three sisters’ lives…before they were at stake.

Everyone knows the legend of Elsabet, the Oracle Queen. The one who went mad. The one who orchestrated a senseless, horrific slaying of three entire houses. But what really happened? Discover the true story behind the queen who could foresee the future…just not her own downfall.


Praise For Queens of Fennbirn…

“Readers will enjoy Blake’s high-quality prose. The author acutely gets at the emotions of her characters, making her readers empathize with intensity from the start as political intrigue drives the plot forward. A must-have. Fans will devour these powerful, world-building novellas.” — School Library Journal