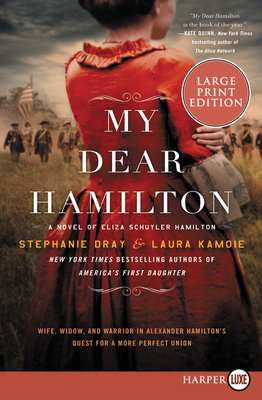 "An edge-of my sear immersion into historical events...No study of Alexander Hamilton would be complete without reading this book." —Karen White, New York Times bestselling author

Wife, Widow, and Warrior in Alexander Hamilton’s quest for a more perfect union

From the New York Times bestselling authors of America’s First Daughter comes the epic story of Eliza Schuyler Hamilton—a revolutionary woman who, like her new nation, struggled to define herself in the wake of war, betrayal, and tragedy. Perfect for fans of Ron Chernow's biography Alexander Hamilton and fans of Lin-Manuel Miranda's Hamilton: the Musical.

In this haunting, moving, and beautifully written novel, Dray and Kamoie used thousands of letters and original sources to tell Eliza’s story as it’s never been told before—not just as the wronged wife at the center of a political sex scandal—but also as a founding mother who shaped an American legacy in her own right.

“Not since I read Erik Larson’s Dead Wake have I had such an edge-of-my-seat immersion into historical events.  Eliza Hamilton is a remarkable heroine, depicted here with gorgeous prose and heart-tugging realism. No study of Alexander Hamilton would be complete without reading this book and learning the true source of the great man’s strength—his wife.  Full of history, engaging characters who shimmer on each page, and a tremendous love story, this is a book for everyone.”
— Karen White, New York Times bestselling author