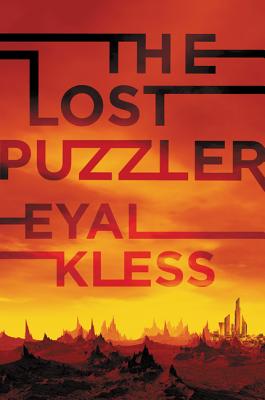 A brilliantly written, page-turning, post-dystopian debut from Eyal Kless, about a society hoping to salvage the technology of a lost generation, a mysterious missing boy who can open doors no one else can, and a scribe who must piece together the past to determine humanity’s future.

More than a hundred years have passed since the Catastrophe brought humanity to the brink of extinction. Those who survived are changed. The Wildeners have reverted to the old ways—but with new Gods—while others place their faith in the technology that once powered their lost civilization.

In the mysterious City of Towers, the center of the destroyed Tarakan empire, a lowly scribe of the Guild of Historians is charged with a dangerous assignment. He must venture into the wilds beyond the glass and steel towers to discover the fate of a child who mysteriously disappeared more than a decade before. Born of a rare breed of marked people, the child, Rafik—known as “The Key”—was one of a special few with the power to restore this lost civilization to glory once again.

In a world riven by fear and violence, where tattooed mutants, manic truckers, warring guilds and greedy mercenaries battle for survival, this one boy may have singlehandedly destroyed humanity’s only chance for salvation—unless the scribe can figure out what happened to him.


Praise For The Lost Puzzler: The Tarakan Chronicles…

“This rich dystopian world includes snippets of technology that perplex most of the characters, a steady mix of storytelling and action, and intense character development that makes the book hard to put down. Kless’ debut, first book of the Tarakan Chronicles, will leave readers eagerly awaiting more.”

“Readers looking for a crafty puzzle that descends into the twisty depths of loyalty and betrayal will enjoy this far-future adventure.” — Publishers Weekly

“Evokes classics of the genre such as Jack Vance’s Dying Earth series and Gene Wolfe’s The Book of the New Sun, throwing in elements of Mad Max and Indiana Jones…a virtuoso performance.” — Financial Times

“Kless, a professional musician, has crafted a debut novel in which all of the elements come together in something approaching perfect harmony, with bass notes of the post-apocalyptic and a multi-part melody of character-based intrigue.” — B&N Sci-Fi & Fantasy Blog

“A coming-of-age story with a difference . . . intriguing and involving.” — Daily Mail (UK)

“[Rafik’s] experiences have an emotional depth that cannot be denied, and that make the novel compelling.” — Sci-Fi Magazine

Eyal Kless is a classical violinist who enjoys an international career both as a performer and a teacher. Born in Israel, Eyal has travelled the world extensively, living several years in Dublin, London, Manchester, and Vienna, before returning to Tel Aviv. His first novel, Rocca's Violin, was published in Hebrew in 2008 by Korim Publishers. Eyal currently teaches violin in the Buchmann-Mehta School of Music at Tel Aviv University, and performs with the Israel Haydn String Quartet, which he founded.