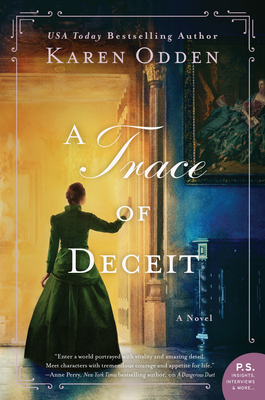 A Trace of Deceit

From the author of A Dangerous Duet comes the next book in her Victorian mystery series, this time following a daring female painter and the Scotland Yard detective who is investigating her brother’s suspicious death.

A young painter digs beneath the veneer of Victorian London’s art world to learn the truth behind her brother’s murder...

Edwin is dead. That’s what Inspector Matthew Hallam of Scotland Yard tells Annabel Rowe when she discovers him searching her brother’s flat for clues. While the news is shocking, Annabel can’t say it’s wholly unexpected, given Edwin’s past as a dissolute risk-taker and art forger, although he swore he’d reformed. After years spent blaming his reckless behavior for their parents’ deaths, Annabel is now faced with the question of who murdered him—because Edwin’s death was both violent and deliberate. A valuable French painting he’d been restoring for an auction house is missing from his studio: find the painting, find the murderer. But the owner of the artwork claims it was destroyed in a warehouse fire years ago.

As a painter at the prestigious Slade School of Art and as Edwin’s closest relative, Annabel makes the case that she is crucial to Matthew’s investigation. But in their search for the painting, Matthew and Annabel trace a path of deceit and viciousness that reaches far beyond the elegant rooms of the auction house, into an underworld of politics, corruption, and secrets someone will kill to keep.


Praise For A Trace of Deceit: A Novel…

"Odden's third effort injects a refreshing level of complexity, both in character development and plotting, into what one typically expects to find in historical cozies. This will appeal to fans of Victorian mysteries, as well as those interested in art history." — Booklist (starred review)

"Odden keenly evokes the physical as well as cultural milieu of Victorian England, and peoples her setting with fully realized and intriguing characters. This book will delight readers who like their mysteries cloaked in well-researched history." — Publishers Weekly

"...this thrilling, action-packed story [is] an absolute delight to read." — Historical Novel Society

"A darkly thrilling story filled with suspense and secrets, a courageous heroine, an edgy climax, and an atmospheric setting that perfectly captures the underbelly of London’s art world in the Victorian era.  A Trace of Deceit is an absolute winner!" — Stefanie Pintoff, Edgar Award winning author

Praise for A Dangerous Duet: &#8220Enter a world of teeming and dangerous cities portrayed in vitality and amazing detail. Meet characters with tremendous courage and appetite for life, and be glad you can return at will to the present.” — Anne Perry, New York Times bestselling author

KAREN ODDEN received her PhD in English literature from New York University and has taught at the University of Wisconsin-Milwaukee and the University of Michigan-Ann Arbor. She currently serves as an assistant editor for the academic journal Victorian Literature and Culture. Her debut novel, A Lady in the Smoke, was a USA Today bestseller.
Loading...
or support indie stores by buying on
(This book is on backorder)