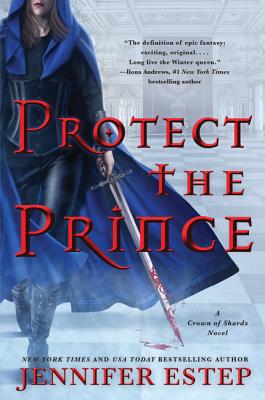 Protect the Prince (A Crown of Shards Novel #2)

Everleigh Blair might be the new gladiator queen of Bellona, but her problems are far from over.

First, Evie has to deal with a court full of arrogant, demanding nobles, all of whom want to get their greedy hands on her crown. As if that wasn’t bad enough, an assassin tries to kill Evie in her own throne room.

Despite the dangers, Evie goes ahead with a scheduled trip to the neighboring kingdom of Andvari in order to secure a desperately needed alliance. But complicating matters is the stubborn Andvarian king, who wants to punish Evie for the deaths of his countrymen during the Seven Spire massacre.

Dark forces are also at work inside the Andvarian palace, and Evie soon realizes that no one is safe. Worse, her immunity to magic starts acting in strange, unexpected ways, which makes Evie wonder whether she is truly strong enough to be a Winter Queen.

Evie’s magic, life, and crown aren’t the only things in danger—so is her heart, thanks to Lucas Sullivan, the Andvarian king’s bastard son and Evie’s … well, Evie isn’t quite sure what Sullivan is to her.


Praise For Protect the Prince (A Crown of Shards Novel #2)…

“KILL THE QUEEN is the definition of epic fantasy:  exciting, original, and filled with characters who jump off the page. Jennifer Estep enters the arena and takes no prisoners. Long live the Winter Queen.”
— Ilona Andrews, #1 New York Times bestselling author

“Jennifer Estep takes the world of high fantasy by storm with a book so perfectly plotted and executed that I gasped out loud at each new reveal and unexpected turn. Evie is the heroine we all want to read about: as compassionate as she is ruthless, as cunning as she is kind, and as fierce and focused as anyone must be in order to KILL THE QUEEN.”
— Amanda Bouchet, USA Today bestselling author of The Kingmaker Chronicles

“Kill the Queen rocked my world! With court intrigue, a cast of fantastic characters, epic political sweep, and a slow-burn romance to die for, this book had me rapt. I only regret I devoured it so fast. And that I didn’t write it. More please!”
— Jeffe Kennedy, RITA® Award winning author of The Pages of the Mind

“a tale as action- and character-driven as its predecessor, proving that strong female protagonists are still in fine form.”
— Library Journal