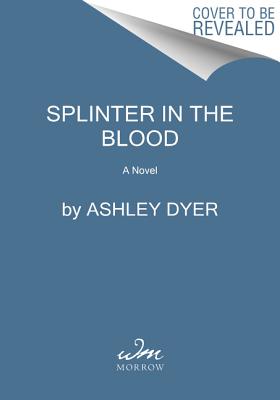 Splinter in the Blood

“One of the boldest, most inventive serial-killer thrillers since The Silence of the Lambs. . . .  Perfect for fans of Jeffery Deaver and Lisa Gardner.”— A. J. Finn, #1 New York Times bestselling author

A propulsive debut suspense novel, filled with secrets, nerve-jangling tension, perplexing mystery, and cold-blooded murder, in which a police officer on the hunt for a macabre serial killer is brutally attacked, and only his partner knows the truth about what happened—and who did it.

After months of hunting a ruthless murderer dubbed the Thorn Killer, Detective Greg Carver is shot in his own home. His trusted partner, Ruth Lake, is alone with him. Yet instead of calling for help, she rearranges the crime scene and wipes the room clean of prints.

Awakening in the hospital, Carver has no memory of being shot, but is certain that his assailant is the Thorn Killer. Though there’s no evidence to support his claim, Carver insists the attack is an attempt to scare the detective off the psychopath’s scent. Trapped in a hospital bed, Carver’s obsession grows. He’s desperate to get back to work and finally nail the bastard, before more innocent blood is spilled.

One person knows the truth and she’s not talking. She’s also now leading the Thorn Killer investigation while Carver recuperates. It doesn’t matter that more victims’ lives are at stake. Ruth is keeping a deadly secret, and she’ll cross every line to keep it from surfacing.


Praise For Splinter in the Blood: A Novel…

“A taut and compelling thriller, as sharp as the thorns that feature in the plot.”
— Ann Cleeves, Internationally Bestselling Author of the Vera Stanhope and Shetland series

“[An] enthralling debut…. The skillfully constructed plot complements the intriguing characters, including a deliciously creepy killer who lurks in the background. Dyer is definitely a crime writer to watch.”
— Publishers Weekly (starred review)

“With complicated leads and a ruthless killer whose method is barbaric enough to be frightening without shading into the grotesque, this is a debut worthy of sequels.”
— Kirkus Reviews

“One of the boldest, most inventive serial-killer thrillers since The Silence of the Lambs. Packed with forensic detail, anchored by a protagonist as complicated as she is compelling, this ferocious novel is perfect for fans of Jeffery Deaver and Lisa Gardner.”
— A. J. Finn, #1 New York Times bestselling author of Woman in the Window

“This novel starts off with a bang of a puzzler and keeps surprising all the way through...Very nice start to a new series.”
— Deadly Pleasures Mystery Magazine

“This is the ultimate cat-and-mouse game between police and a psycho…but it has so much more. The need to delve into this book and reveal the secrets is difficult to avoid... Just know that whatever you think you know…you will be wrong.”
— Suspense Magazine

“I love this book. I love the main character, Ruth Lake, and love the dynamic with her partner, Carver. The science of the investigation felt like a Patricia Cornwell novel, as well as the intrigue. I really appreciated the complicated ethics of Ruth, something unique in detective novels.”

Ashley Dyer is a writing duo based in the United Kingdom.

Margaret Murphy is a Writing Fellow and Reading Round Lector for the Royal Literary Fund, a past chair of the Crime Writers Association (CWA), and founder of Murder Squad. A CWA Short Story Dagger winner, she has been shortlisted for the First Blood critics’ award for crime fiction as well as the CWA Dagger in the Library. Under her own name she has published nine psychological suspense and police procedural novels.

Helen Pepper is a senior lecturer in policing at Teesside University. She has been an analyst, forensic scientist, scene of crime officer, CSI, and crime scene manager. She has coauthored, as well as contributed to, professional policing texts. Her expertise is in great demand with crime writers: she is a judge for the CWA’s Gold Dagger for Non-Fiction Award, and is a forensic consultant on both the Vera and Shetland TV series.