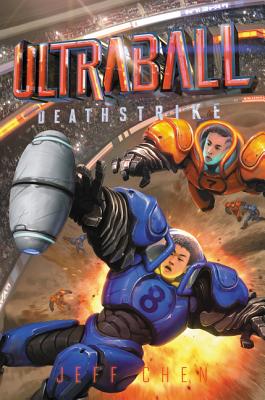 The stakes are extreme in the second book of Jeff Chen’s futuristic, action-packed Ultraball series. Win-or-lose turns into life-or-death in this thrilling middle grade adventure tailor-made for sports and sci-fi fans.

Strike and the Miners are hungrier than ever for a championship after losing yet another Ultrabowl. When they suffer a shocking defeat in their season opener, Strike knows that something is off with his game, but the secret hampering his play is too large to reveal.

If he can’t perform at the highest level, what chances do the Miners have against the unstoppable Neutrons?

Worse yet, his powerful enemy, Raiden Zuna, knows Strike is hiding something. Zuna offers to help, and Strike is tempted—but the information Zuna wants in return threatens Strike’s friend Boom, as well as the growing Dark Side resistance. When rumors surface about Zuna’s mysterious grand plan, code-named Operation Deathstrike, Strike’s choice could have consequences he never anticipated.

Even as the Ultraball games ratchet up in intensity, with teams using explosive new tactics to reach the Ultrabowl, Strike has bigger decisions to make if he wants to keep his teammates—and the moon—safe.

“Plenty of twists to keep readers guessing. Every Ultraball game is tightly written with great clarity... an intriguing hybrid of football and sci-fi with plenty of butt jokes.”
— Kirkus Reviews

“Chen’s debut delivers a smart and subtle exploration of socioeconomic inequality. Sf and sports readers alike will enjoy the futuristic dystopia Chen has created. Fans of Mike Lupica, Dan Gutman, and Tim Green looking to get their feet wet in sf should be directed to this series opener.”
— ALA Booklist

Jeff Chen is a writer from Seattle, Washington. He also makes crossword puzzles for the New York Times and other major publications. In previous careers, he was a mechanical engineer listed on eight US patents, and then co-founded a pharmaceutical company, Acucela Inc. Ultraball is his debut novel. You can visit Jeff at www.jeffchenwrites.com.