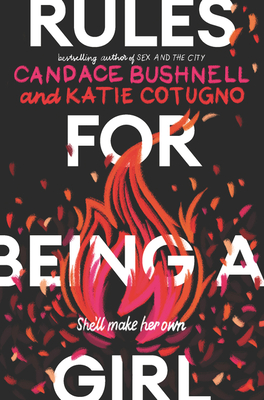 Rules for Being a Girl

It starts before you can even remember: You learn the rules for being a girl. . . .

Marin has always been good at navigating these unspoken guidelines. A star student and editor of the school paper, she dreams of getting into Brown University. Marin’s future seems bright—and her young, charismatic English teacher, Mr. Beckett, is always quick to admire her writing and talk books with her.

But when “Bex” takes things too far and comes on to Marin, she’s shocked and horrified. Had she somehow led him on? Was it her fault?

When Marin works up the courage to tell the administration what happened, no one believes her. She’s forced to face Bex in class every day. Except now, he has an ax to grind.

But Marin isn’t about to back down. She uses the school newspaper to fight back and she starts a feminist book club at school. She finds allies—and even romance—in the most unexpected people, like Gray Kendall, who she’d always dismissed as just another lacrosse bro.

As things heat up at school and in her personal life, Marin must figure out how to take back the power and write her own rules.


Praise For Rules for Being a Girl…

An engrossing and engaging read, filled with dynamic characters. While Marin’s is a fight that should never be necessary, her experience is one that many women and girls will unfortunately relate to. A powerful story of a girl determined to make others look her in the eyes and listen.  — Associated Press

“A blistering look at a girl who, when her eyes are opened by an injustice, reacts by taking action…. Readers will be glad for this take from two powerhouse creators.” — ALA Booklist

Candace Bushnell is the critically acclaimed New York Times bestselling author of The Carrie Diaries, Sex and the City, Is There Still Sex in the City?, Lipstick Jungle, One Fifth Avenue, 4 Blondes, Trading Up, and Summer and the City, which have sold millions of copies. Sex and the City was the basis for the HBO hit shows and films, and its prequel, The Carrie Diaries, was the basis for the CW television show of the same name. Lipstick Jungle became a popular television show on NBC. Is There Still Sex in the City? is in development with Paramount Television. Candace lives in New York City and Sag Harbor. Visit her at www.candacebushnell.com.

Katie Cotugno is the New York Times bestselling author of seven romantic young adult novels, including 99 Days and You Say It First, and is the co-author, with Candace Bushnell, of Rules for Being a Girl. Her books have been honored by the Junior Library Guild, the Bank Street Children’s Book Committee, and the Kentucky Association of School Librarians, among others, and translated into more than fifteen languages.  Katie is a Pushcart Prize nominee whose work has appeared in The Iowa Review, The Mississippi Review, and Argestes, as well as many other literary magazines. She studied Writing, Literature and Publishing at Emerson College and received her MFA in Fiction at Lesley University. She lives in Boston with her family.