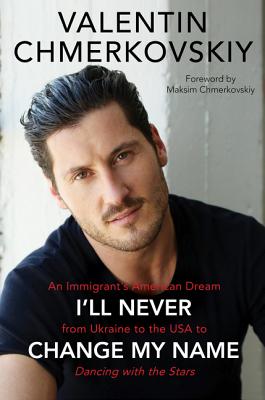 Valentin Chmerkovskiy, the world championship-winning and beloved Dancing with the Stars ballroom dancer invites fans into his life as never before, sharing the experiences, including the failures and successes, that have shaped him, from his early childhood in Ukraine to growing up as an immigrant in the U.S. to his rise to international fame.

Val has captivated viewers of Dancing with the Stars since his first performance in 2011. While DWTS demonstrates Val’s beautiful physicality, this moving memoir illuminates his soul, revealing a deep, thoughtful person who channels his emotions and socially conscious views through his art. The beloved dance champion and choreographer assesses his life and career so far—where he’s come from and where he hopes to go.

For the first time, Val looks back at his childhood in Odessa, Ukraine, and his Jewish family’s immigration to the United States—including what it was like to grow up as a stranger desperate to fit into a different culture, how he worked to become a premiere dancer, and, of course, the collaborations and competitions with his brother and fellow DWTS sensation, Maksim "Maks" Chmerkovskiy.

Val speaks warmly of his close-knit family and shares intimate and inspiring stories meant to offer hope and motivation not only to fans but to everyone with a dream. Enduring anti-Semitism in their native land, Val’s parents wanted a better life for their children—a desire that led them to leave everything they knew and start again thousands of miles away in a foreign country. It was a gamble that paid off—after years of practice and discipline, Val, along with his older brother Maks, have reached the pinnacle of success. Though he admits he sometimes still feels like an outsider, Val expresses his enduring gratitude for everything that America represents and pays homage to his adopted nation and the opportunities it has afforded him and his family.

Inspiring, heartfelt, and compulsively readable—and showcasing sixteen-pages of never-before-seen photographs, as well as a foreword by brother Maks—Val’s memoir is filled with the moments that have moved and shaped him, and is sure to touch readers’ hearts as well.

Valentin “Val” Chmerkovskiy was born in Ukraine, immigrated to the United States at the age of eight, and grew up in Brooklyn. He is the first American to have won two IDSF World Championships, one in Juniors and one in Youth. He is also a fourteen-time US National Champion, a classically trained violinist, and a mentor. Val is a cofounder and creative director at Dance with Me Studios, a national chain of dance studios, which he cofounded with his brother and fellow DWTS pro, Maks. Most recently, Val won the Season 23 Mirrorball Trophy with Olympian Laurie Hernandez. He splits his time between Los Angeles and New York City.


Praise For I'll Never Change My Name: An Immigrant's American Dream from Ukraine to the USA to Dancing with the Stars…

“In I’ll Never Change My Name there’s so much more to Val than people know; and this book gives the world an opportunity to see who he truly is-creative, kind, brave, and inspiring.”
— Laurie Hernandez, New York Times bestselling author of I Got This: To Gold and Beyond

“One of the first things I ever said to Val when I got to know him was, ‘You’ve got to get your story out so people can be inspired by it.’ With this book he’s done that and more…it’s funny, smart and extremely creative.”
— Kobe Bryant

“Reading his moving memoir, you’ll discover that he’s more than his name, more than Maks’s little brother, and more than the talented dancer millions see on Dancing with the Stars...Val embodies what it means to live the American dream.”
— -- Robin Roberts, Good Morning America

“’I’ll Never Change My Name’ takes readers on a journey in which Chmerkovskiy forces us to consider the inaccurate labels we stick on people and the drive it takes to succeed as someone who doesn’t necessarily fit in.”
— Lisa Ko, author of The Leavers
or
Buy Here
Copyright © 2020 American Booksellers Association