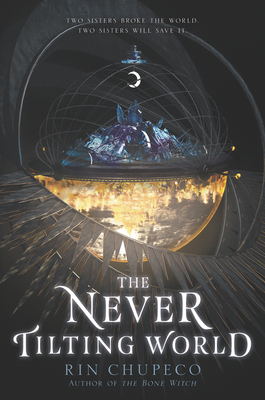 “The Never Tilting World is what happens when Garth Nix meets Mad Max: Fury Road. It’s a dark, lovely, and even timely look at a world that’s fallen apart, with just the right blend of epic action and twisted magic.” — Tara Sim, author of Timekeeper

“Dark and richly drawn, The Never Tilting World is a lavish fantasy about sisterhood, sacrifice, and finding strength in a treacherous world. Chupeco’s writing is lushly descriptive, transporting me to the brink of the abyss; while reading it, I could swear the world stood still.” — Heidi Heilig, author of For a Muse of Fire

“Complex, brutal, romantic, and terrifying. With a phenomenal cast of characters who stick to your bones and vivid worldbuilding that shows up in your dreams, this is a book that demands to be experienced.” — Dahlia Adler, author of Under the Lights and editor of His Hideous Heart

"A  vivid, exquisitely realized, and compellingly unique YA fantasy." — Tor.com

Rin Chupeco has written obscure manuals for complicated computer programs, talked people out of their money at event shows, and done many other terrible things. They now write about ghosts and fantastic worlds but are still sometimes mistaken for a revenant. They are the author of The Girl from the Well, its sequel, The Suffering, and the Bone Witch trilogy. Find them at www.rinchupeco.com.