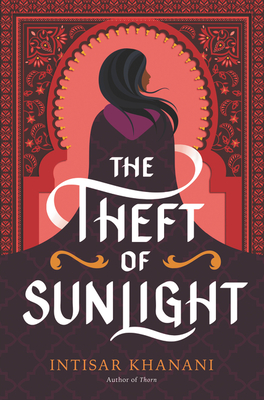 The Theft of Sunlight (Dauntless Path #2)

Perfect for fans of The Cruel Prince and Sorcery of Thorns, this exhilarating, page-turning fantasy will pull readers into a lush and stunning world where nothing—and no one—can be trusted.

I did not choose this fate. But I will not walk away from it.

Children have been disappearing from across Menaiya for longer than Amraeya ni Ansarim can remember. When her friend’s sister is snatched, Rae knows she can’t look away any longer—even if that means seeking answers from the royal court, where her country upbringing and clubfoot will only invite ridicule.

Yet the court holds its share of surprises. There she discovers an ally in the foreign princess, who recruits her as an attendant. Armed with the princess’s support, Rae seeks answers in the dark city streets, finding unexpected help in a rough-around-the-edges street thief with secrets of his own.

But treachery runs deep, and the more Rae uncovers, the more she endangers the kingdom itself.

“Set in a dark and dangerous world. Well-written and dramatically told, teens will find much to love in a novel in which the princess grows to become a force to be reckoned with.”  —School Library Journal (starred review)


Praise For The Theft of Sunlight (Dauntless Path #2)…

"Deeply engaging and piercing. An illustration that courage and strength can be found in unexpected places and in unexpected people. Amraeya’s refusal to give up even when all the odds are stacked against her will inspire many, many readers." — Nafiza Azad, author of The Candle and the Flame

“Khanani deftly navigates heavy themes while spinning an investigative tale packed with action, excellent banter, and court intrigue.” — Sarah Henning, author of THE PRINCESS WILL SAVE YOU and the SEA WITCH duology

“A vivid masterpiece with some chilling parallels to the unseen battles fought in our present day and a striking heroine who has a fierce passion for justice.”  — Nadine Brandes, author of ROMANOV and FAWKES

“Political intrigue, child slavery, societal inequities, and physical infirmities are all explored in this quick-paced read by the author of Thorn.”  — School Library Journal

“While sleuthing and danger aplenty keep things moving, Rae’s clashes with engaging thief Bren illuminate questions about the nature of justice and the responsibility of power… Returning readers will be delighted, but this is a friendly entry point for new readers, too.“ — Bulletin of the Center for Children’s Books

Praise for Intisar Khanani’s THORN:   “Set in a dark and dangerous world…well-written and dramatically told, teens will find much to love in a novel in which the princess grows to become a force to be reckoned with.” — School Library Journal (starred review)

“Khanani beautifully crafts Alyrra’s quiet but clear journey of self-definition… [Thorn] is sure to appeal to fans of Carson’s The Girl of Fire and Thorns and Ahdieh’s The Wrath and the Dawn.” — Bulletin of the Center for Children’s Books (starred review)

“Immersive and captivating…[will] draw in fans of fantasy and slow-burn romance.” — Kirkus Reviews

“Thorn is a lovely atmospheric fairytale fantasy about a girl and her found family. I loved it!” — Gail Carriger, New York Times-bestselling author of the Parasol Protectorate and Finishing School series

"A quietly profound and beautiful fairytale retelling that I'll be recommending for years." —  S. A. Chakraborty, author of City of Brass

“Lush and vividly imagined, THORN takes a folktale we think we know and turns it into something new: a story of and for our time, with lessons that will remain with readers long after they have finished the last, glorious pages.”

"Khanani’s Thorn explores themes of resilience, responsibility, and identity in a darkly captivating retelling that is more than the sum of its parts. This is the kind of book that digs under your skin and makes a home, demanding reflection and frequent re-reads.”  — Tracy Banghart, author of Grace and Fury

"A vivid retelling of a classic tale, full of love, justice, and empathy."  — Emily B Martin, author of the Creatures of Light series

Intisar Khanani grew up a nomad and world traveler. Born in Wisconsin, she has lived in five different states as well as in Jeddah on the coast of the Red Sea. She first remembers seeing snow on a wintry street in Zurich, Switzerland, and vaguely recollects having breakfast with the orangutans at the Singapore Zoo when she was five. She currently resides in Cincinnati, Ohio, with her husband and two young daughters.

Intisar is also the author of Thorn. To find out what she is working on next and connect with her online, visit www.booksbyintisar.com.