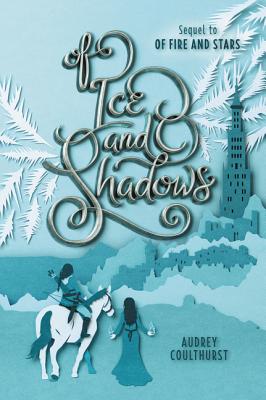 Of Ice and Shadows (Of Fire and Stars #2)

“Offers an essential allegory for the tenuousness of queer relationships in an often damaging world.” — ALA Booklist

Praise for INKMISTRESS: “Coulthurst emphasizes self-reliance, forgiveness, and the redemptive power of love in this satisfying tale” — Publishers Weekly

Praise for INKMISTRESS: “Asra’s rich emotions in the face of difficult choices in this coming-of-age saga will absorb audiences.” — Booklist

Praise for INKMISTRESS: “Engag[es] teens in a mystical world of darkness and blood magic. Fans of dragons, dark magic, and romance will embrace this novel.” — School Library Journal

Praise for OF FIRE AND STARS: “A powerful and exquisite love story” — Publishers Weekly (starred review)

Praise for OF FIRE AND STARS: “A deeply romantic, bold, and nuanced fantasy. You will be captivated by Denna and Mare and their star-crossed love for each other.” — Malinda Lo, Author of Ash and Huntress

Praise for OF FIRE AND STARS: “Lovely…a worthy debut that succeeds as both an adventure and a romance.” — Booklist

Praise for OF FIRE AND STARS: “Murder, mayhem, magic, romance—and horses…a romantic fantasy that will appeal to those who appreciate character-driven novels.” — Kirkus Reviews

Praise for OF FIRE AND STARS: “I devoured Of Fire and Stars in two sittings; it’s a delightful debut, full of all the things I like best in a fantasy story, including not one but two wonderful heroines. I’m looking forward to seeing what Audrey does in the future!” — Mercedes Lackey, New York Times bestselling author of over 125 books, including the Valdemar series

Praise for OF FIRE AND STARS: “Coulthursts’s debut is an absolute delight; I loved seeing these smart, fierce princesses fall in captivating, slow-burn love as they investigate political assassinations and unravel magical conspiracies.” — Corinne Duyvis, author of Overbound and On the Edge of Gone

Praise for OF FIRE AND STARS: “Romantic, compelling, and bursting with fascinating characters, Of Fire and Stars is the fantasy novel we’ve all been waiting for.” — Amy Tintera, author of Ruined

Praise for OF FIRE AND STARS: “Romantic, compelling, and bursting with fascinating characters, Of Fire and Stars is the fantasy novel we’ve all been waiting for.” — Voice of Youth Advocates (VOYA)