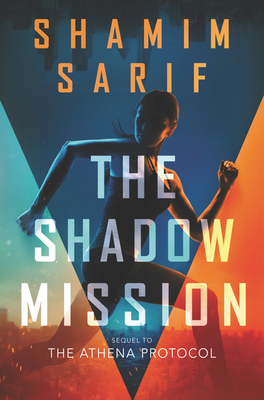 Jessie Archer faced down death to prove her dedication to Athena, the elite organization of female spies she works for. Now she’s back on the team, in time to head to Pakistan to take down the man whose actions spurred Athena’s founders to create the secretive squad.

But his connections spread farther than anyone knew, and when a girls’ school in Mumbai is bombed, a shadowy far-right organization reveals itself—and its evil plans to continue attacks.

When someone close to the investigation turns on Athena, Jessie knows that their time to save everyone is nearly up. Once again, she’ll have to risk everything to protect the vulnerable and prove herself.


Praise For The Shadow Mission…

"This woman-centered spy series is as fast-paced and engaging as the first. Jessie continues to confront the universality of patriarchal norms, misogyny, and oppressive treatment of women worldwide. A badass, action-packed, feminist page-turner." — Kirkus Reviews

"Sarif throws readers back into the action-packed world of Athena that keeps readers turning pages. With female spies, arch enemies, and quick pacing, this book will be a hit with anyone. Jessie, Caitlin, and Hala are reminiscent of Charlie’s Angels without Charlie in the speaker box." — School Library Journal

"This book is full of twists and turns as well as tons of action, investigation, and awesome spy-related thrills. A solid and engaging sequel, The Shadow Mission is a great action/suspense read with strong female characters and high-octane crime solving." — YA Books Central

PRAISE FOR The Athena Protocol:  “Imagine if Mission: Impossible were run by young, brilliant, ultra-skilled female operatives who undertook rogue operations to save the women and girls of the world from kidnappers and traffickers. Shamim Sarif has written a ferocious, take-no-prisoners thriller that actually thrills, with a deep heart and characters you’ll adore. What a wonderful and exciting new voice in YA. More please!” — Patrick Ness, New York Times  bestselling author of The Rest of Us Just Live Here  and A Monster Calls

&#8220Finally! The female version of James Bond we’ve been waiting for! Only better—this team of black-ops spies exclusively kick ass and take the names of those who prey on women and girls: warlords and human traffickers. With a diverse cast of heroes and villains, a global scope, and just a hint of romance, it makes taking down the patriarchy fun.” — Natalie C. Anderson, author of City of Saints and Thieves