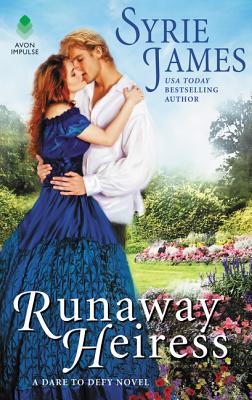 When a runaway heiress runs into trouble, she may end up exactly where she belongs in this brand new series by USA Today bestselling author Syrie James…

Brainy and college-educated, American heiress Alexandra Atherton will do anything to avoid marriage to the English peer her mother has chosen for her--even abandon the life of privilege she's always known. But as her escape goes horribly wrong, Alexandra must invent a new identity to gain the help of a handsome stranger.

Thomas Carlyle, the Earl of Longford, sweeps in and out of London disguised as a humble artist, earning just enough to keep his ancestral Cornwall estate afloat. When Alexandra crashes into his life, she awakens feelings and desires that he vows will stay buried. Despite himself, he needs this beautiful newcomer, for his sisters have run off another governess.

Alexandra is surprised to find she thrives in her new position at Longford's home. But as she grows closer to Thomas and his sisters, and her relationship with the emotionally guarded earl unleashes their hidden passions, the truth Alexandra's been forced to hide may end up coming between her and the only man she's ever loved.