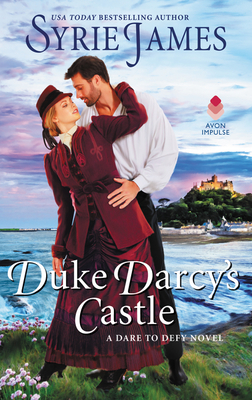 A Dare to Defy Novel

In Syrie James’s newest Dare to Defy novel, a devastating duke goes head to head with a determined young woman.

Lance Granville, the Tenth Duke of Darcy, was none too happy to give up his career in the Royal Navy to inherit the family title, complete with an ancient castle he needs to renovate. When an architect arrives on his doorstep, Darcy is astonished to discover that she’s a woman.

Kathryn Atherton has one goal: to become the first woman architect in Britain. Marriage doesn’t figure in her plans. Despite the odds, her schooling is behind her. Now she needs experience. When she’s sent to a small tidal island in Cornwall to remodel a castle, the last thing Kathryn wants is to be attracted to its roguishly handsome owner.

Kathryn is determined to keep things professional, but the sizzling attraction between her and the duke quickly blazes out of control. When Darcy learns that Kathryn is an heiress whose fortune would save St. Gabriel’s Mount, he wages the most important battle of his life: to woo and win the woman who’s captured his heart. But duchesses can’t be architects. And Kathryn has worked too long and too hard to give up her dreams…