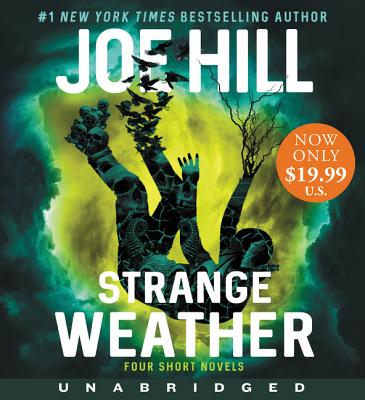 “Joe Hill delivers with Strange Weather, a collection of four novellas. Hill has developed a writing style akin to an oil slick - eerie sentences that leave behind something that shines unclean. There's nothing clean about Strange Weather; each tale is a horrific glimpse just beyond normalcy. Horror can often be best delivered as an understatement, luring the reader into a world that seems just reasonable enough. When Hill reveals his tricks (whether a magical camera or a cloud disguised as a UFO), they loom uncomfortably dark on the horizon. Fans of H.P. Lovecraft won't be disappointed with this collection.”
— Atticus Solomon (M), Literati Bookstore, Ann Arbor, MI
View the List

"Snapshot," performed by Wil Wheaton, is the disturbing story of a Silicon Valley adolescent who finds himself threatened by "The Phoenician," a tattooed thug who possesses a Polaroid Instant Camera that erases memories, snap by snap.

A young man takes to the skies to experience his first parachute jump. . . and winds up a castaway on an impossibly solid cloud, a Prospero’s island of roiling vapor that seems animated by a mind of its own in "Aloft," performed by Dennis Boutsikaris.

On a seemingly ordinary day in Boulder, Colorado, the clouds open up in a downpour of nails—splinters of bright crystal that shred the skin of anyone not safely under cover. "Rain," performed by Kate Mulgrew, explores this escalating apocalyptic event, as the deluge of nails spreads out across the country and around the world.

In "Loaded," performed by Stephen Lang, a mall security guard in a coastal Florida town courageously stops a mass shooting and becomes a hero to the modern gun rights movement. But under the glare of the spotlights, his story begins to unravel, taking his sanity with it. When an out-of-control summer blaze approaches the town, he will reach for the gun again and embark on one last day of reckoning.

With an afterword from Joe Hill, read by the author.

Masterfully exploring classic literary themes through the prism of the supernatural, Strange Weather is a stellar collection from an artist who is "quite simply the best horror writer of our generation" (Michael Kortya).

Kate Mulgrew, a native of Dubuque, Iowa, is an actress and author with an extensive career on stage and screen. From her start as Mary Ryan, the lead role on the popular soap opera Ryan's Hope to the groundbreaking first female starship captain on Star Trek: Voyager to her acclaimed performance as Galina "Red" Reznikov on Netflix's smash hit Orange Is The New Black, Kate brings a formidable presence and deep passion to all her projects. Her 2016 book, Born With Teeth, allowed her to add "New York Times bestselling author" to her resume.

Stephen Lang's Broadway work includes Wait Until Dark, A Few Good Men, The Speed of Darkness and Death of a Salesman. His films include Last Exit to Brooklyn, Gettysburg, Gods and Generals, and Tombstone. He is the Co-Artistic Director of the Actors Studio.

Dennis Boutsikaris received an Obie Award for his performance in Sight Unseen and was Mozart in Amadeus on Broadway. His films include *batteries not included, The Dream Team, and Boys On The Side. His TV work includes And Then There Was One, The Last Don and Chasing The Dragon; he was most recently the D.A. of NY in Sidney Lumet's 100 Centre Street.