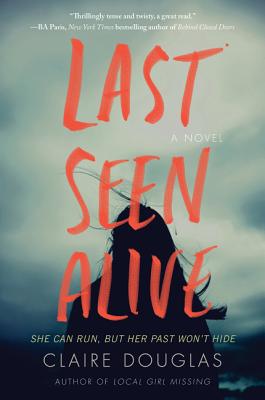 One woman is trapped in the death-grip of the past—and every one of its dark secrets—in this riveting novel of psychological suspense from the award-winning author of The Sisters and Local Girl Missing.

As much as Libby Hall needs a vacation, she’s never considered taking one until she sees the note for a house swap. Suffering a miscarriage was a personal turning point. Saving a child from a burning school was a public one. Just as the emotional fallout of both incidents takes its toll, along comes her lifesavers—the Heywoods, a couple in need of a getaway of their own.

But she can’t hide…

Libby and her husband Jamie can’t believe their good fortune when they arrive at the Heywood’s isolated seaside estate with its panoramic views—and just in exchange for their drab two-bedroom apartment. How generous of the Heywoods! Yet how odd. Libby almost feels guilty until the home yields disquieting surprises: a fortune in hidden surveillance equipment, a stranger in the garden who watches them, and the make-shift operating room in the basement…

Because someone knows her secret…

When Jamie falls dangerously ill, all Libby wants is to return to their comfortably imperfect lives. But it’s already too late. Libby has just discovered the Heywoods’ biggest secret. And when it appears that even Jamie is hiding something from her, Libby’s paranoia gets the best of her. It should. For she has buried secrets of her own. As the past comes crawling out of the darkness, Libby fears she’s walked into an elaborate trap. But who has set it? What do they want of her? And what is she willing to risk to make it out alive…?

Claire Douglas has worked as a journalist for fifteen years, writing features for women’s magazines and newspapers, but she’s dreamed of being a novelist since the age of seven. She finally got her wish after winning Marie Claire’s Debut Novel Award for her first book, The Sisters, which became a bestseller. She lives in Bath, England, with her husband and two children.

“Thrillingly tense and twisty, a great read.”
— B. A. Paris, the bestselling author of Behind Closed Doors

“Just finished Last Seen Alive . . . it’s so twisty, turning and grippy. Highly recommend it!
— Gilly Macmillan, the bestselling author of What She Knew

“Fast-paced and chock-full of twists, Last Seen Alive is both absorbing and gripping. After reading it you’ll never dream of a house swap again.”
— Paula Daly, author of The Mistake I Made
or support indie stores by buying on
Copyright © 2020 American Booksellers Association