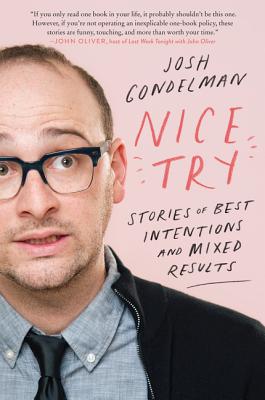 “If you only read one book in your life, it probably shouldn’t be this one. However, if you’re not operating an inexplicable one-book policy, these stories are funny, touching, and more than worth your time.” — John Oliver

“Josh Gondelman is one of the most original hilarious voices out there today. This book will hook you and make you laugh and laugh.” — Amy Schumer

Josh Gondelman knows a thing or two about trying—and failing. The Emmy Award-winning stand-up comic—dubbed a “pathological sweetheart” by the New York Observer—is known throughout the industry as one of comedy’s true “nice guys.” Not surprisingly, he’s endured his share of last-place finishes. But he keeps on bouncing back.

In this collection of hilarious and poignant essays (including his acclaimed New York Times piece “What if I Bombed at My Own Wedding?”), Josh celebrates a life of good intentions—and mixed results. His true tales of romantic calamities, professional misfortunes, and eventual triumphs reinforce the notion: we get out of the world what we put into it. Whether he’s adopting a dog from a suspicious stranger, mitigating a disastrous road trip, or trying MDMA for the first (and only) time, Josh only wants the best for everyone—even as his attempts to do the right thing occasionally implode.

Full of the warm and relatable humor that’s made him a favorite on the comedy club circuit, Nice Try solidifies Josh Gondelman’s reputation as not just a good guy, but a skilled observer of the human condition.

“If you only read one book in your life, it probably shouldn’t be this one. However, if you’re not operating an inexplicable one-book policy, these stories are funny, touching, and more than worth your time.” — John Oliver, host of Last Week Tonight with John Oliver

“Josh Gondelman is a great comedian, super nice, and now the author of a terrific bunch of essays.  How annoying.” — Jim Gaffigan, author of Food: A Love Story and Dad is Fat

“Josh Gondelman is a human cardigan and this book is like a warm, consensual hug.” — Samantha Irby, author of Meaty

“Josh Gondelman is one of the most original hilarious voices out there today. This book will hook you and make you laugh and laugh.” — Amy Schumer, author of The Girl with the Lower Back Tattoo

“Nice Try makes me wish I was friends with Josh in high school. His take on the world is something we need more of— it’s optimistic, observant, sincere, and insanely funny. Read this book.” — Hasan Minhaj, host of Patriot Act

“Josh Gondelman is a comedian who looks like an author, so this book makes a lot of sense. Like him, it’s hilarious, excellent and fun.” — Pete Holmes, author of Comedy Sex God

“Josh Gondelman reinforces what I love so deeply about his writing: chock full of wit, so wonderfully hilarious, and unafraid to be vulnerable and honest. Yes, he is known as one of the nicest dudes in comedy, but he’s also one of the most funny and consistent. This book will not disappoint, so stop reading this blurb already and read the book!” — Phoebe Robinson, author of Everything’s Trash, But It’s Okay

“Reading Nice Try is like carrying around a good friend with you, someone who’s funny and compassionate and always reminding you to do better. If you’re lucky enough to read Josh Gondelman, you’re sure to leave the experience a happier, kinder person. (And as a real bonus, you’ll laugh, too.) There’s good in the world yet — Nice Try is a great reminder of that.” — Scaachi Koul, author of One Day We’ll All Be Dead and None of This Will Matter

“Josh Gondelman is hilarious. This book proves he clearly wouldn’t have survived if he wasn’t.” — Judd Apatow

“I laughed on every single page of Josh’s book and insisted on reading much of it aloud to whoever was sitting next to me. I did not always know those people, but I choose to believe they loved it too.” — Jill Twiss, author of A Day in the Life of Marlon Bundo

“Like the best conversation with your smartest, funniest friend, these essays leave you feeling a little bit better about the world. Gondelman doesn’t flinch from self-examination or the complexities of life, but navigates both with such warmth and wit that I miss his company already.” — Cynthia-D’Aprix-Sweeney, author of The Nest

“Gondelman’s chops as a comedy writer are on full display throughout, and his observations are hilariously spot-on… [His] fun, witty book is a marvel of emotional depth and cutting one-liners.” — Publishers Weekly

“[A] sweet and laugh-out-loud-funny memoir… [Gondelman’s] whip-smart observational humor pierces through at every turn… This reads like a delicious, extended season of The Wonder Years.” — Booklist

“A quick and amiable read… Nice Try reaches [its] revelation gradually, through poignant stories of bungled pet adoptions and recognizing that anger is a valid emotion even for a self-described pushover.” — AV Club

“Both witty and matter-of-fact, Nice Try: Stories of Best Intentions and Mixed Results encourages readers to take solace in Gondelman’s mishaps and keep trying until desired results are achieved… This hilarious and heartfelt essay collection reminds readers to be who we want to be.” — Shelf Awareness

Josh Gondelman is a comedian and writer who has earned two Peabody Awards, three Emmys, and two WGA Awards for his work on Last Week Tonight with John Oliver on HBO. He is currently a writer/producer for Desus & Mero on Showtime. In the past, Josh has written for Billy on the Street. His writing has also appeared in the New York Times, New York magazine, and the New Yorker. He lives in New York City with his wife and pug.