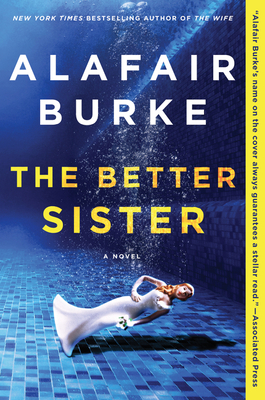 
Praise For The Better Sister: A Novel…

“Cunning.... Readers of The Better Sister, Alafair Burke’s wonderfully twisty new thriller, should get ready to be led down the garden path to a conclusion so morally ambiguous a professional ethicist might have to be called in.” — Washington Post

“Coming off of last year’s brilliantly timely The Wife, psychological-suspense master Burke traces the uneasy relationship between two sisters and how it’s tested in the wake of a grisly murder.” — Entertainment Weekly

“Alafair Burke’s name on the cover always guarantees a stellar read, and this novel is no exception. Elements of other domestic thrillers are in abundance, but the author knows how to take what could easily be cliché and make it feel brand-new. The realistic family relationship carries this story to great heights and wonderful surprises.” — Associated Press

“In addition to being a gripping thriller, this is a poignant look at the lives of two very different sisters—and how seemingly inconsequential events can often bring about great sacrifices. Burke gets better with each new read.” — Karin Slaughter

“One hell of a rip-roaring read.... Taut-domestic-and-courtroom-thriller aspects aside, Burke is, as always, terrific on the salient cultural details that bring her characters to vibrant life.” — Seattle Review of Books

“The Better Sister is more than a standard-issue whodunit. The underlying mystery becomes the mystery of character. . . . [Burke] caps her story with a keenly detailed trial taut with suspense. The case spins with reversals—it isn’t over even when it’s over.” — Newsday

“Burke hits the ground running with the highly entertaining The Better Sister, and the story continues to peak in one believable twist after another. Surprises lead The Better Sister to a sizzling finale.” — South Florida Sun Sentinel

“Compelling.... In addition to the powerful characteristics of a thriller, The Better Sister is also a psychological investigation of social media, gender in business, childrearing, and family ties.” — New York Journal of Books

“The fans who put Burke’s last domestic thriller on the bestseller list are going to be happy with this one, a gimmick-free murder mystery with a two-stage surprise ending and uncommonly few credibility straining plot elements…. You’ll kill this one fast and be glad you did.” — Kirkus

“A straightforward and uncomplicated character-driven mystery that also delves into the topics of sisterhood and abuse. Mystery lovers will find much to enjoy in this fast-moving whodunit.” — Library Journal

“Burke has a flair for creating compelling characters who bring out a plethora of emotions from the reader. A worthy follow-up to last year’s smash The Wife. Do not miss!” — Tulsa Book Review

“A brilliant look at the lengths a mother (or two) will go for family.” — BookPage

“If you love twisty thrillers like we do, you won’t want to miss The Better Sister.” — BookBub

“Sure to be one of the year’s most celebrated suspense novels....Burke brings readers into an enticing world and then shatters them with one startling revelation after another, always keeping a firm grip on the suspense and packing each sentence full with feeling.” — CrimeReads

“You know just from the title that this is going to be a winner; you also know it’s a “must read” from the simple fact that Alafair Burke is the author….A non-stop thriller fest.” — Suspense Magazine

“Chilling and thrilling....Will keep you engaged from start to finish.” — FreshFiction