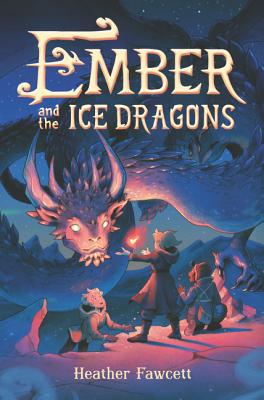 Ember and the Ice Dragons (Hardcover)

A stunning middle grade fantasy about a girl who used to be a dragon and her adventure to save her new home—from Even the Darkest Stars author Heather Fawcett. Perfect for fans of the Nevermoor and His Dark Materials series.

Ember St. George is a dragon. At least she was before her adoptive father—a powerful but accident-prone Magician—turned her into a human girl to save her life.

Unfortunately, Ember’s growing tendency to burst into flames at certain temperatures—not to mention her invisible wings—is making it too dangerous for her to stay in London. The solution: ship Ember off to her aunt’s research station in frigid Antarctica.

Though eccentric Aunt Myra takes getting used to, Ember quickly feels at home in a land of ice storms, mischievous penguins, and twenty-four-hour nights. She even finds herself making friends with a girl genius called Nisha and a mysterious orphan named Moss.

Then she discovers that Antarctica is home to the Winterglass Hunt, a yearly tradition in which rare ice dragons are hunted for their jeweled scales. Furious, Ember decides to join the hunt to sabotage it from the inside.

But being an undercover dragon isn’t easy—especially among dragon hunters. Can a twelve-year-old fire dragon survive the dangers that come her way in the Antarctic wilderness and protect the ice dragons from extinction?

Heather Fawcett is the author of the middle grade novels Ember and the Ice Dragons and The Language of Ghosts, as well as the young adult series Even the Darkest Stars. She has a master’s degree in English literature and has worked as an archaeologist, photographer, technical writer, and backstage assistant for a Shakespearean theater festival. She lives on Vancouver Island, Canada. Visit Heather online at www.heatherfawcettbooks.com.


Praise For Ember and the Ice Dragons…

“Fawcett’s story is full of original details that add depth… But it is the richly nuanced primary and secondary characters, as well as the evenhanded inclusion of females as intelligent scientists, that give the story its richness… Fresh and original.”
— Kirkus Reviews

“Stunning descriptions and well-rounded characters are woven into a story that hums with excitement and adventure.”
— ALA Booklist

&#8220A n interesting twist on the typical dragon novel…. Bookworm readers will relate to Ember’s solitude-loving character in spite of her different species, and astute readers will see real-life parallels to the ethics of dragon hunting.”
— Bulletin of the Center for Children’s Books

“Smart, funny and full of wonder. Part gripping Arctic adventure, part richly woven fantasy, this is the rare type of story that readers will want to visit again and again.”
— Kim Ventrella, author of Skeleton Tree and Bone Hollow

“Full of intrigue and adventure, magic and science, Ember and the Ice Dragons will keep you reading all the way to the last icy, breathless page.”
— Ruth Lauren, author of Prisoner of Ice and Snow

Praise for EVEN THE DARKEST STARS: “An utterly inventive and wholly original debut.”
— Booklist

Praise for EVEN THE DARKEST STARS: “With a dash of romantic entanglement, a rich original mythology, and a sizzler of a twist at the end, this duology opener will appeal to fans of femalecentric fantasy by such authors as Leigh Bardugo and Sarah Maas.”
— Kirkus Reviews

Praise for EVEN THE DARKEST STARS: “Fawcett brings snow-capped mountains—and their baleful secrets—alive in this magical, atmospheric debut.”
— Evelyn Skye, New York Times bestselling author of The Crown’s Game and The Crown’s Fate

Praise for EVEN THE DARKEST STARS: “Cinematically vivid…immersive and absorbing.”
— Bulletin of the Center for Children’s Books

Praise for EVEN THE DARKEST STARS: “A lush adventure filled with magic, myth, and monsters. Even the Darkest Stars will sweep you off your feet, steal your heart somewhere between the mountains and sky, and leave you breathless.”
— Sarah Glenn Marsh, author of Fear the Drowning Deep and Reign of the Fallen
or support indie stores by buying on
Copyright © 2020 American Booksellers Association