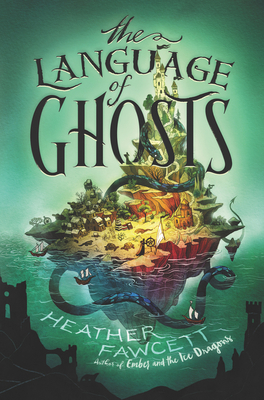 The Language of Ghosts

The Penderwicks meets Howl’s Moving Castle in this thrilling middle grade fantasy adventure about a trio of royal siblings who unlock a long-forgotten magical language in their bid to reclaim their stolen throne—from Ember and the Ice Dragons author Heather Fawcett. Perfect for fans of Kelly Barnhill and Robert Beatty.

Forced into exile on an enchanted, moving island, ex-princess Noa Marchena has two missions: reclaim her family’s stolen throne and ensure that the dark powers her older brother, Julian, possesses don’t go to his head in the process. But between babysitting her annoying little sister, Mite, and keeping an eye on the cake-loving sea monster that guards the moving island, Noa has her hands full.

When the siblings learn that their enemies are searching for a weapon capable of defeating Julian—whose legendary spell weaving is feared throughout the kingdom—once and for all, they vow to get to it first. To everyone’s surprise, the key to victory turns out to be a long-lost magical language—and only Noa can speak it.

But what if by helping her brother, Noa ends up losing him?


Praise For The Language of Ghosts…

“A sly, cake-eating sea serpent; an elderly dragon familiar; and vain otters who can “move in and out of death” make for an endearing supporting cast, while the siblings, with their distinct personalities and inevitable squabbles, make for an authentic focal point. Fans of Eva Ibbotson and Diana Wynne Jones will appreciate Fawcett’s well-paced, wholly imaginative middle grade romp.” — Publishers Weekly (starred review)

“Readers will roll their eyes in sympathy at the sibling shenanigans Noa has to put up with and cheer as she comes into her own.”   — Bulletin of the Center for Children’s Books

“Fawcett’s story is full of original details that add depth… But it is the richly nuanced primary and secondary characters, as well as the evenhanded inclusion of females as intelligent scientists, that give the story its richness… Fresh and original.”
— Kirkus Reviews

“Stunning descriptions and well-rounded characters are woven into a story that hums with excitement and adventure.” — ALA Booklist

“Smart, funny and full of wonder. Part gripping Arctic adventure, part richly woven fantasy, this is the rare type of story that readers will want to visit again and again.” — Kim Ventrella, author of Skeleton Tree and Bone Hollow

“Full of intrigue and adventure, magic and science, Ember and the Ice Dragons will keep you reading all the way to the last icy, breathless page.” — Ruth Lauren, author of Prisoner of Ice and Snow

Praise for EVEN THE DARKEST STARS: &#8220An utterly inventive and wholly original debut.”
— ALA Booklist

“With a dash of romantic entanglement, a rich original mythology, and a sizzler of a twist at the end, this duology opener will appeal to fans of femalecentric fantasy by such authors as Leigh Bardugo and Sarah Maas.” — Kirkus Reviews

“Cinematically vivid…immersive and absorbing.” — Bulletin of the Center for Children’s Books

Heather Fawcett is also the author of the middle grade novels The School Between Winter and Fairyland, The Language of Ghosts, and Ember and the Ice Dragons as well as the young adult Even the Darkest Stars series. She has a master’s degree in English literature and has worked as an archaeologist, photographer, technical writer, and backstage assistant for a Shakespearean theater festival. She lives on Vancouver Island, Canada. Heather can be found online at www.heatherfawcettbooks.com.