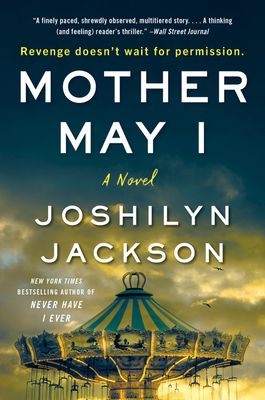 “I’m a huge Joshilyn Jackson fan, and she’s written another fast-paced, exhilarating read with Mother May I. This domestic thriller is comparable to a roller coaster, taking you to dramatic, earth-shaking highs before dropping your heart into your stomach on the lows. I quickly devoured this book but didn’t miss its poignant, timely message. Powerful, smart, thrilling — a new favorite.”
— Beth Mynhier, Lake Forest Book Store, Lake Forest, IL
View the List

"Chilling, thought-provoking, and hauntingly written, Mother May I kept me on the edge of my seat with its breathless race against time." — Megan Miranda, New York Times bestselling author of The Girl from Widow Hills

The New York Times bestselling author of the critically acclaimed Never Have I Ever returns with an even more addictive novel of domestic suspense in which a mother must decide how far she is willing to go to protect her child and the life she loves—an unforgettable tale of power, privilege, lies, revenge, and the choices we make, ones that transform our lives in unforeseen ways.

Growing up poor in rural Georgia, Bree Cabbat was warned that the world was a dark and scary place. Bree rejected that fearful outlook, and life has proved her right. Having married into a family with wealth, power, and connections, Bree now has all a woman could ever dream of.

Until the day she awakens and sees someone peering into her bedroom window—an old gray-haired woman dressed all in black who vanishes as quickly as she appears. It must be a play of the early morning light or the remnant of a waking dream, Bree tells herself, shaking off the bad feeling that overcomes her.

Later that day though, she spies the old woman again, in the parking lot of her daugh­ters’ private school . . . just minutes before Bree’s infant son, asleep in his car seat only a few feet away, vanishes. It happened so quickly—Bree looked away only for a second. There is a note left in his place, warning her that she is being watched; if she wants her baby back, she must not call the police or deviate in any way from the instructions that will follow.

The mysterious woman makes contact, and Bree learns she, too, is a mother. Why would another mother do this? What does she want? And why has she targeted Bree? Of course Bree will pay anything, do anything. It’s her child.

To get her baby back, Bree must complete one small—but critical—task. It seems harmless enough, but her action comes with a devastating price.

Bree will do whatever it takes to protect her family—but what if the cost tears their world apart?


Praise For Mother May I: A Novel…

"[A] well-written and powerfully effective story whose protagonists (and readers) end up getting much more than they bargained for." — Wall Street Journal, Best Books of 2021

“Joshilyn Jackson’s latest riveting thriller starts with a bang and doesn’t let up, asking how well you truly know the people around you—and how far you’re willing to go for the ones you love. A true page-turner that will stick with me for a long time.” — Megan Miranda, New York Times bestselling author of The Girl from Widow Hills, on Mother May I

"Longtime readers of Jackson’s who embraced her genre switch from Southern fiction to domestic thriller with Never Have I Ever will be glad to see she’s taken things a step grittier and darker with Mother May I. Fast-paced and twisty, there’s also redemption and a bit of grace down that debris-filled, winding road." — Atlanta Journal-Constitution

"Joshilyn Jackson does it again with this explosive, white-knuckle read about a mother who will stop at nothing to protect her family. Terrifying, timely and thought-provoking, I couldn't tear my eyes away from Mother May I." — Mary Kubica, New York Times bestselling author of The Other Mrs.

"Gripping . . . The dark secret at the novel's heart rings all too true. Jackson knows how to ratchet up the suspense." — Publishers Weekly on Mother May I

“All the things we love about Joshilyn Jackson come together with panache in Mother May I: subtle yet scalding insights on the nature of privilege, compelling, vibrant characters, and the wily plot and breakneck pace of a thriller. Mother May I sets a new standard for the genre: it’s razor-sharp, merciless, and masterful.” — Rose Carlyle, #1 internationally bestselling author of The Girl in the Mirror, on Mother May I

"If Joshilyn Jackson has not yet been deemed the Queen of the Twist, I would like to award her that title. I picked up Mother May I before bed, wholly unprepared for how immediately drawn in I would be. I stayed up way too late and then did not put it down the entire next day. Rarely do I say something is “unputdownable,” but I have no reservations about saying so in this case. Such a fantastic psychological mystery — I was enthralled until the very end!” — Shane Mullen of Left Bank Books for Buzzfeed News, on Mother May I

"One writer who never fails to amuse is Atlanta author Joshilyn Jackson. She brings humor to all her work as well as a relatable yet quirky voice. Both of those strengths are evident in Mother May I . . . The stakes are higher than they have ever been. What is more important than protecting your own child? Bree is one of Jackson’s most relatable characters, and readers will root for her as she tries to negotiate a nightmarish game of revenge and deceit." — The Augusta Chronicle (Atlanta) on Mother May I

"Fan favorite Joshilyn Jackson is back with the suspenseful (seriously!) story of Bree, who grew up poor but defiantly hopeful. After marrying into money, Bree now has everything she could've dreamed of. Until the day she sees an old, gray-haired woman—a witch?—haunting her. Then her baby boy vanishes in the blink of an eye, leading Bree down a tangled path with devastating consequences. After all, what wouldn't a mother do for her child?" — Country Living on Mother May I

"An addictive domestic suspense, Jackson’s latest asks how far a mother will go to protect her child." — Parade on Mother May I

"The New York Times bestselling author of the critically acclaimed Never Have I Ever builds on her success with this addictive novel of domestic suspense in which a mother must decide how far she is willing to go to protect her child and the life she loves—a chilling and thoughtful tale of power, privilege, lies, revenge, and the choices we make, ones that transform our lives in unforeseen ways." — The Nerd Daily on Mother May I

"The tension is skillfully built . . . a thriller with a sharp #MeToo edge." — Kirkus Reviews on Mother May I

“Suspense readers will enjoy plot twists and motivations that hit close to home . . . The novel’s depth lies in exploring the role of a mother to protect and teach her children . . .  Fans of Mary Kubica . . . will appreciate the mixture of suspense with complex characters.” — Booklist on Mother May I

"Mother May I is perfectly balanced between its plot and characters. It lends itself to quick reading—there is no good place to stop—yet one is sorry when it ends. Readers who are new to Jackson’s talent will want to acquire her significant backlist as they wait for her next book, while those who are already familiar with her catalog will find their patience rewarded.” — Book Reporter on Mother May I