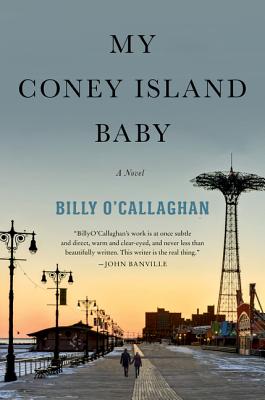 An exquisite, heart-breaking novel by an Irish discovery.

Radiant with beauty, longing, and desire, and deeply touching, this literary novel, reminiscent of the works of William Trevor and Colm Tóibín, evokes the long love affair between a man and a woman, each married to another, who meet every month in a decaying hotel in Coney Island, Brooklyn.

On a bitterly cold winter’s afternoon, Michael and Caitlin, two middle-aged lovers, escape their unhappy marriages to keep an illicit date. Once a month for the past quarter of a century, Coney Island has been their haven, the place in which they have abandoned themselves to their love.

These beautiful, carefully-rationed days have long sustained Michael and Caitlin’s love, and have helped help them survive the tedium of their lives separate from each other. But now, amid the howling winds whipping off the Atlantic, and a snow storm blackening the horizon, this nearly abandoned resort feels like the edge of the world. On this winter day, burrowed in their private cocoon, they will discover that their lives are on the brink of change.

Michael’s wife is battling cancer, and Caitlin’s husband is about to receive a major promotion, which will involve relocating to the Midwest. After half a lifetime together in their most intimate moments, certain long-denied facts must be faced, decisions made, consequences weighed and, maybe, just maybe, chances finally taken.

A quiet, intense depiction of love and intimacy, My Coney Island Baby reveals, within the course of a single day’s passing, the histories, landscapes, tragedies and occasional moments of wonder that constitute the lives of two people who, although living worlds apart, have been inexorably drawn together. But even in this most private of retreats, a place seemingly built for romance, the most heartbreaking of realities loom.


Praise For My Coney Island Baby: A Novel…

&#8220An illicit meeting between long-term lovers makes for a poignant, piercing meditation on middle age and the passing of time…In the closing pages, O’Callaghan’s prose reaches a pitch of emotional intensity that ensures these characters will linger with you long after the book is closed.”
— The Guardian

“This is not an epic novel. There are no heroes. It is the story of two ordinary people trapped in their ordinary lives. But in the hands of O’Callaghan it is magnified to the truly extraordinary. A great tragedy. I long thought Anita Brookner the high priestess when it comes to telling the tales of loneliness and defeat. But she’s now got company.”