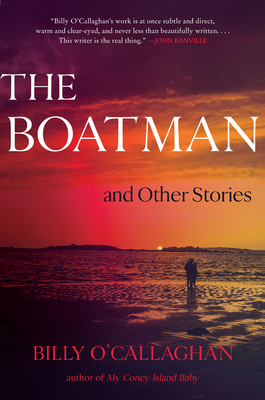 The Boatman and Other Stories

“I know of no writer on either side of the Atlantic who is better at exploring the human spirit under assault than Billy O’Callaghan.”—Robert Olen Butler

The prizewinning Irish short-story writer and author of the highly praised novel, My Coney Island Baby, delivers his most accomplished book of short fiction to date—a poignant story collection that “grips from the opening page” (Bernard MacLaverty).

These are twelve poignant, quietly dazzling, and carefully crafted stories that explore the resiliency of the human heart and its ability to keep beating in the wake of bereavement, violence, lost love, and incomparable trauma and grief.

Spanning a century and two continents, from the muddy fields of Ireland to a hotel room in Paris, a dingy bar in Segovia to an airplane bound for Taipei, The Boatman and Other Stories follows an unforgettable cast of characters. Three gunshots on the Irish border define the course of a young man’s life; a writer clings fast to a star-crossed affair with a woman who has never been fully within his reach; a fisherman accustomed to hard labor rolls up his sleeves to dig a grave for his child; and a pair of newlyweds embark on their first adventure, living wild on the deserted Beginish Island.


Ranging from the elegiac to the brutally confrontational, these densely layered tales reveal the quiet heroism and gentle dignity of ordinary life. Billy O’Callaghan is a master celebrant of the smallness of the human flame against the dark: its strength and its steady brightness.


Praise For The Boatman and Other Stories…

“The Boatman and Other Stories tears at the heartstrings of the reader with each story…An appreciation for life and love shines through…An excellent body of work to be enjoyed.” — San Francisco Book Review

“This collection of taut, lyrical short stories explores the choices of characters at the limits of emotional and physical extremes… O'Callaghan's affection for the harsh landscape of Ireland is as strong as his knowledge of his flawed and emotionally driven characters, to the point that they seem to grow inevitably out of that misty, unforgiving place.” — Booklist

“Love, bereavement, Paris in the rain give an unforced gravity and lyricism to these stories…which focus on the glimmer of heart in the hardness of life.” — Sunday Times (UK)

“A shining example of how [short stories] can distil and intensify a writer’s gifts… These 12 stories confirm [O’Callaghan’s] delicate craftsmanship, unflashy narrative and descriptive skill, and his deep understanding of powerful and universal emotions… Breathtaking… Masterly… Irish writing has put out many new and more consciously modernist shoots in recent years, all welcome. But Billy O’Callaghan belongs now in the recognised front rank, along with Bernard MacLaverty, Edna O’Brien, William Trevor and Colm Tóibín.” — The Tablet (UK)

Billy O'Callaghan was born in Cork in 1974, and is the author of three short story collections: In Exile and In Too Deep(2008 and 2009 respectively, both published by Mercier Press), and The Things We Lose, The Things We Leave Behind'(2013, published by New Island Books), which was honoured with a Bord Gais Energy Irish Book Award and which has been selected as Cork's "One City, One Book" for 2017.

His first novel, really a ghost story entitled The Dead House, was published by a small Irish press (Brandon Books/O'Brien Press) in May 2017, and will be published in the U.S. by Arcade in May 2018.

A recipient of the 2013 Bord Gais Energy Irish Book Award for Short Story of the Year, and a 2010 Arts Council of Ireland Bursary Award for Literature, his story, "The Boatman" was recently shortlisted for the 2016 Costa Short Story Award. He has won and been shortlisted for numerous other honours, including the George A. Birmingham Award, the Lunch Hour Stories Prize, the Molly Keane Creative Writing Award, the Sean O'Faolain Award, the RTE Radio 1 Francis MacManus Award, the Faulkner/Wisdom Award, the Glimmer Train Prize and the Writing Spirit Award. He was also short-listed four times for the RTE Radio 1 P.J. O'Connor Award for Drama. He also served as the 2016 Writer-in-Residence for the Cork County Libraries.