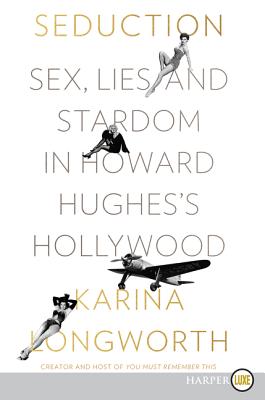 Vivid, perceptive, timely, and ridiculously entertaining, The Seducer is a landmark work that examines women, sex, and male power in Hollywood during its golden age—a legacy that endures nearly a century later.

“A candid portrait of the multifaceted millionaire…As his romantic tastes shifts from known quantities — like Hepburn, Rogers and Gardner — to powerless unknowns, Seduction reveals the root of Hughes’s interest in women: a desire to exert total control, rather than true affection.”
— Washington Post

“Audacious and welcome.”
— Sight and Sound

“Karina Longworth loves Hollywood the way it ought to be loved — mercilessly. She is a skeptic without cynicism, a feminist without apology, and in Seduction she has found the great subject that her essential podcast has long promised”
— James Kaplan, author of Sinatra

“An entertaining and timely tour of early Hollywood mores and manipulation. No matter how much you think you know about golden age Hollywood, Longworth serves up fascinatingly fresh perspective on the ways male desire and power shaped movie mythology.”
— Joy Press, author of Stealing the Show

“Full of insight...illuminating and memorable.”
— Booklist

“Throughout this densely researched and lively book the siren song of the new medium of film is heard.”
— Cineaste
or support indie stores by buying on
Copyright © 2020 American Booksellers Association