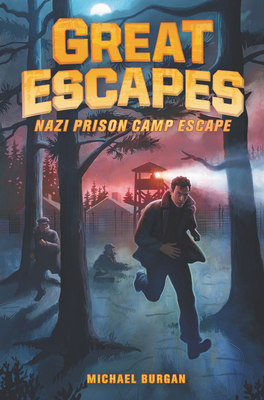 Are you ready for some of the most exciting, death-defying escape stories ever told? Perfect for fans of the I Survived series, the first installment in a brand-new, edge-of-your-seat series based on real events!

In spring 1942, Royal Air Force pilot Bill Ash’s plane was shot down by Germans, who captured and eventually brought him to Stalag Luft III, a notorious camp for prisoners of war. The Germans boasted that the camp—which was isolated, heavily guarded, and surrounded by wire fences—was escape proof.

But Ash was ready to prove them wrong. He, along with other POWs, would dig tunnels, hide in shower drains, or jump on trucks—all in the name of freedom. Because resisting the Germans was their mission, and escaping was their duty.

From reluctant reader to total bookworm, each book in this page-turning series—featuring fascinating bonus content and captivating illustrations—will leave you excited for the next adventure!

Michael Burgan has written more than 250 books for children and young adults. His specialty is history, with an emphasis on biography. A graduate of the University of Connecticut with a degree in history, Burgan is also a produced playwright and the editor of The Biographer’s Craft, the newsletter for Biographers International Organization. He first started writing for children as an editor at Weekly Reader before beginning his freelance career in 1994. He lives in Santa Fe, New Mexico.

James Bernardin is a versatile and prolific illustrator of many acclaimed books for children. He has illustrated Laura Numeroff's Would I Trade My Parents?, Eve Bunting's Too Many Monsters, and Candy Chand's The Twelve Prayers of Christmas. He has also created artwork for numerous book covers, including Mary Pope Osborne's Tales from the Odyssey series.

James lives on Bainbridge Island in Washington State with his wife, Lisa, and two sons, Wyeth and Bryson.