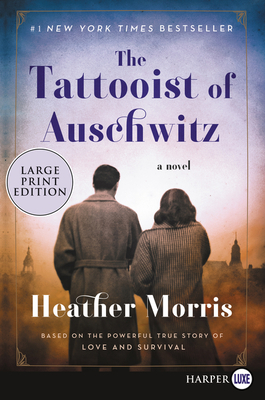 The Tattooist of Auschwitz


Praise For The Tattooist of Auschwitz: A Novel…

“Based on a true story, the wrenching yet riveting tale of Lale’s determination to survive the camp with Gita is a moving testament to the power of kindness, ingenuity, and hope.”

“Like the Nobel Prize-winning author Elie Wiesel’s Night, Morris’ work takes us inside the day-to-day workings of the most notorious German death camp. Over the course of three years, Morris interviewed Lale, teasing out his memories and weaving them into her heart-rending narrative of a Jew whose unlikely forced occupation as a tattooist put him in a position to act with kindness and humanity in a place where both were nearly extinct.”
— BookPage

“The Tattooist of Auschwitz is the story of hope and survival against incredible odds and the power of love.”
— Popsugar

“The Tattooist of Auschwitz is an extraordinary document.. I find it hard to imagine anyone who would not be drawn in, confronted and moved. I would recommend it unreservedly to anyone, whether they’d read a hundred Holocaust stories or none.”
— Graeme Simsion, internationally-bestselling author of The Rosie Project

“What an extraordinary and important book this is. We need as many memories of the Holocaust as we can retain, and this is a moving and ultimately uplifting story of love, loyalties and friendship amidst the horrors of war.”
— International bestseller Jill Mansell

“As many interviews as I did with Holocaust survivors for the Shoah Foundation and as many devastating testimonies as I heard, I could not stop reading THE TATTOOIST OF AUSCHWITZ—an extraordinary story of love so fierce it sustained people enduring the unimaginable. Read it, share it, remember it.”
— Jenna Blum, NYT and international bestselling author of Those Who Save Us and The Lost Family

“To many, this book will be most appreciated for its powerful evocation of the everyday horrors of life as a prisoner in a concentration camp, while others will be heartened by the novel’s message of how true love can transcend even the most hellishly inhuman environments. This is a perfect novel for book clubs and readers of historical fiction.”
— Publishers Weekly

“..this is a powerful, gut-wrenching tale that is hard to shake off.”
— Kirkus Reviews

“Although one might suspect that there’s far more to his past than is revealed here, much of Lale’s story’s complexity makes it onto the page. And even though it’s clear that Lale will survive, Morris imbues the novel with remarkable suspense.”

Heather Morris is a native of New Zealand, now resident in Australia. For several years, while working in a large public hospital in Melbourne, she studied and wrote screenplays, one of which was optioned by an Academy Award-winning screenwriter in the US. In 2003, Heather was introduced to an elderly gentleman who ‘might just have a story worth telling’. The day she met Lale Sokolov changed both their lives. Their friendship grew and Lale embarked on a journey of self-scrutiny, entrusting the innermost details of his life during the Holocaust to her. Heather originally wrote Lale’s story as a screenplay – which ranked high in international competitions – before reshaping it into her debut novel, The Tattooist of Auschwitz.
Loading...
or support indie stores by buying on