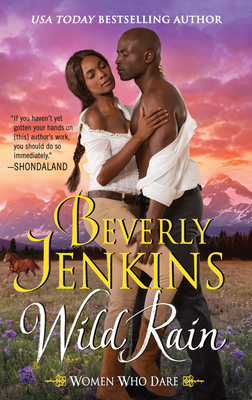 Banished by her grandfather at the age of eighteen, Spring Lee has survived scandal to claim her own little slice of Paradise, Wyoming. She’s proud of working her ranch alone and unwilling to share it with a stranger—especially one like Garrett McCray, who makes her second-guess her resolve to avoid men.

Garrett escaped slavery years ago and is now a reporter in Washington. He’s traveled west to interview Dr. Colton Lee for an article, yet it’s Lee’s fearless sister, Spring, who captures his interest. Clad in denim and buckskins instead of dresses, she’s the most fascinating woman he’s ever met. And he’s certain she also feels the connection that sizzles between them.

But when a shadow from Spring’s past returns, all is on the line: her ranch, her safety—and this wild, fierce love.

“Wild Rain will linger in your thoughts for its remarkably likable hero, spirited heroine, beautiful horses, scenery, adventure, and romance. It's the kind of excellent storytelling that keeps us coming back for more, again and again from Beverly Jenkins." — NPR

“Jenkins is a historical romance legend — and if you haven’t yet gotten your hands on the USA Today bestselling author’s work, you should do so immediately.” — Shondaland

“Jenkins knows how to craft a romantic yarn against a historical backdrop with all the attendant power and punch befitting her status as a romance icon.” — Entertainment Weekly

"This book has all the hallmarks of Jenkins’ fiction—meticulous historical research, a frank look at social conditions for Black people of the time, masterful pacing, and complex, likable characters." — Kirkus (starred review)

"Jenkins once again proves why she’s a giant of the genre."  — Publishers Weekly (starred review)

"Wild Rain is a perfect, touching and romantic tale... An excellent romance with a wonderful and memorable heroine..." — All About Romance (DIK)