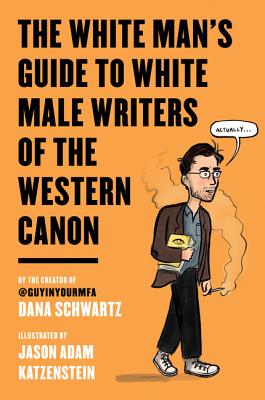 How do you use ‘taraddidle’ in a sentence? Is it possible to make a Gin Ricky that’s also a metaphor for the American Dream?  How can you tell your Faulkner from your Franzen if you haven’t actually read either?

Allow me, the @GuyInYourMFA, to expound on the most important (aka white male) writers of western literature. You’ve probably seen me around, observing the masses, or defying the wind by hand-rolling a cigarette outside a local, fair-trade coffeeshop. I’ve actually read Infinite Jest 9 1/2 times. Care to discuss?

From Shakespeare's greatest mystery (how could a working-class man without access to an MFA program be so prolific?) to the true meaning of Kafkaesque (you know you've made it when you have an adjective named for you), the pages herewith are at once profound and practical. Use my ingenious Venn diagram to test your knowledge of which Jonathan—Franzen, Lethem, or Safran Foer—hates Twitter and lives in Brooklyn. (Trick question: all 3!) Sneer at chick-lit and drink Mojitos like Hemingway (not like middle-aged divorcées!).

So instead of politely nodding along next time you make an acquaintance at a housewarming party in Brooklyn, you can roll up your sleeves and get to work schooling them in character arcs and the experimental form of your next great American novel. Dazzle your friends with how well you understand post-modernism. You’ll be at a literary event asking a question “that’s really more of a comment” in no time.

"Schwartz gives her most famous creation, the Twitter parody account @GuyInYourMFA, free reign to speak his opinion in this hilarious book, cathartic for anyone who’s ever taken an English class. With characteristic conceitedness (which, of course, he’d deny he has), @GuyinYourMFA goes over the white male writers who have dominated curricula for all too long." — Refinery 29

DANA SCHWARTZ (@DanaSchwartzzz) is an arts and culture writer whose work has appeared in Entertainment Weekly, Marie Claire, GQ, Bustle, Glamour, Vanity Fair, NewYorker.com, the Guardian, Mental_Floss, VICE, Brooklyn Magazine, and more. She’s the creator of popular literary Twitter accounts @GuyInYourMFA and@DystopianYA and the author of memoir CHOOSE YOUR OWN DISASTER and YA novel AND WE’RE OFF. She also hosts the podcast Noble Blood. Dana lives in Los Angeles with her cat, Beetlejuice.

JASON ADAM KATZENSTEIN is a cartoonist and writer for print and television. His work has appeared in The New Yorker, the New York Times and MAD Magazine, and on Cartoon Network. He is the illustrator of The White Man's Guide to White Male Writers of the Western Canon and the graphic novel Camp Midnight. He is also a visiting professor at Wesleyan University.
Loading...
or support indie stores by buying on