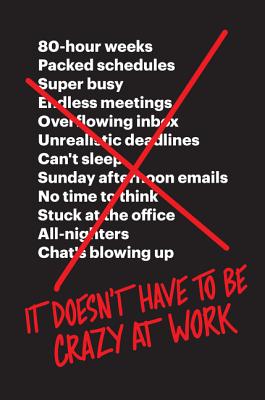 It Doesn't Have to Be Crazy at Work

In this timely manifesto, the authors of the New York Times bestseller Rework broadly reject the prevailing notion that long hours, aggressive hustle, and "whatever it takes" are required to run a successful business today.

In Rework, Jason Fried and David Heinemeier Hansson introduced a new path to working effectively. Now, they build on their message with a bold, iconoclastic strategy for creating the ideal company culture—what they call "the calm company." Their approach directly attack the chaos, anxiety, and stress that plagues millions of workplaces and hampers billions of workers every day.

Long hours, an excessive workload, and a lack of sleep have become a badge of honor for modern professionals. But it should be a mark of stupidity, the authors argue. Sadly, this isn’t just a problem for large organizations—individuals, contractors, and solopreneurs are burning themselves out the same way. The answer to better productivity isn’t more hours—it’s less waste and fewer things that induce distraction and persistent stress.

Fried and Hansson have the proof to back up their argument. "Calm" has been the cornerstone of their company’s culture since Basecamp began twenty years ago. Destined to become the management guide for the next generation, It Doesn't Have to Be Crazy at Work is a practical and inspiring distillation of their insights and experiences. It isn’t a book telling you what to do. It’s a book showing you what they’ve done—and how any manager or executive no matter the industry or size of the company, can do it too.


Praise For It Doesn't Have to Be Crazy at Work…

“Their book is funny, well-written and iconoclastic and by far the best thing on management published this year.”   — The Economist

“Each [chapter is] packed with a punch that seems both profound and practical—profound for how clear and different they tend to be from most accepted business wisdom, and practical because almost everything they describe is immediately applicable.” — 800-CEO-READ

“In short, jargon-free chapters, the authors challenge the way many of today’s businesses are run.” — Financial Times

“An urgent conversation to have.” — Wall Street Journal

JASON FRIED is the cofounder and CEO of Basecamp. He started the company back in 1999 and has been running the show ever since. Along with David, he wrote Getting Real, REWORK, and REMOTE. When it comes to business, he thinks things are simple until you make them complicated. And when it comes to life, we’re all just trying to figure it out as we go.

DAVID HEINEMEIER HANSSON is the cofounder of Basecamp and the New York Times bestselling coauthor of REWORK and REMOTE. He’s also the creator of the software toolkit Ruby on Rails, which has been used to launch and power Twitter, Shopify, GitHub, Airbnb, Square, and over a million other web applications. Originally from Denmark, he moved to Chicago in 2005 and now divides his time between the US and Spain with his wife and two sons. In his spare time, he enjoys 200-mph race cars in international competition, taking cliché pictures of sunsets and kids, and ranting far too much on Twitter.