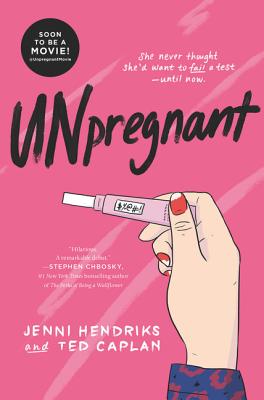 Perfect for fans of Juno and Jennifer E. Smith, Unpregnant is a heartfelt and funny YA debut about fierce friendship, reproductive rights, and the wild road to adulthood. Now a movie streaming on HBO Max, starring Haley Lu Richardson as Veronica and Barbie Ferreira as Bailey.

“Hilarious. A remarkable debut.” —Stephen Chbosky, #1 New York Times bestselling author of The Perks of Being a Wallflower

Seventeen-year-old Veronica Clarke never thought she’d want to fail a test—that is, until she finds herself staring at a piece of plastic with two solid pink lines. With a college-bound future now disappearing before her eyes, Veronica considers a decision she never imagined she’d have to make: an abortion.

There’s just one catch—the closest place to get one is over nine hundred miles away. With conservative parents, a less-than-optimal boyfriend, and no car, Veronica turns to the only person who won’t judge her: Bailey Butler, a legendary misfit at Jefferson High—and Veronica’s ex-best friend.

What could go wrong? Not much, apart from three days of stolen cars, crazed ex-boyfriends, aliens, ferret napping, and the betrayal of a broken friendship that can’t be outrun. Under the starlit skies of the Southwest, Veronica and Bailey discover that sometimes the most important choice is who your friends are.

This breakout novel is from authors Jenni Hendriks (writer for How I Met Your Mother) and Ted Caplan (music editor for The Hate U Give).

TIME CALLS THE UNPREGNANT MOVIE "A SPIRITED COMEDY ABOUT A WOMAN'S RIGHT TO CHOOSE."

Jenni Hendriks’s mom often complained she was “a real smart**s,” so she decided to make a career out of it. She moved to Hollywood and worked her way from coffee-fetcher to writer for the television series How I Met Your Mother. She is also a cartoonist whose feminist-inspired works have been published in Ms. magazine. A film school graduate, she knows how to rack focus and wrangle a cable and can tell you what a best boy does.

Ted Caplan has been working in the film industry for over twenty years as a writer, sound designer, and music editor. He has helped craft the soundtracks to many high-profile projects, such as The Maze Runner, Logan, both Deadpool films, and The Hate U Give. He is also the screenwriter of Love Sonia, a feature film about international sex trafficking from the producers of Life of Pi and Slumdog Millionaire.