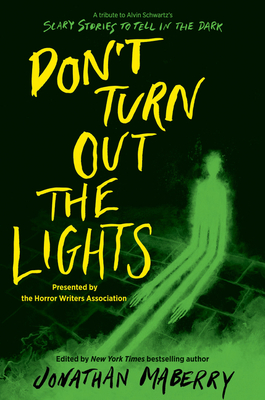 Don’t Turn Out the Lights

Featuring stories from R.L. Stine and Madeleine Roux, this middle grade horror anthology, curated by New York Times bestselling author and master of macabre Jonathan Maberry, is a chilling tribute to Alvin Schwartz’s Scary Stories to Tell in the Dark.

Flesh-hungry ogres? Brains full of spiders? Haunted houses you can’t escape? This collection of 35 terrifying stories from the Horror Writers Association has it all, including ghastly illustrations from Iris Compiet that will absolutely chill readers to the bone.

So turn off your lamps, click on your flashlights, and prepare—if you dare—to be utterly spooked!


Praise For Don’t Turn Out the Lights: A Tribute to Alvin Schwartz's Scary Stories to Tell in the Dark…

"Each tale is creepy. Pithy and punchy...perfect to 'tell in the dark.'"
— Horn Book Magazine

"Exceptional stories. A big variety of tone and style. I love this book."
— Mother Horror (blog)

"A fitting tribute to Alvin Schwartz. There is is much fun to be had within these pages. A lovely gateway book into horror for many kids."
— Ginger Nuts of Horror (blog)

Jonathan Maberry is a New York Times bestselling and five-time Bram Stoker Award–winning author, anthology editor, comic book writer, executive producer, and writing teacher. He is the creator of V Wars (Netflix) and Rot & Ruin (Alcon Entertainment). His books have been sold to more than two dozen countries. To learn more about Jonathan, visit him online at www.jonathanmaberry.

D. J. MacHale ("The Scout") is a bestselling author and is also a director, executive producer, and creator of several popular television series and movies. He lives in Southern California with his family, where they spend a lot of time backpacking, scuba diving, and skiing