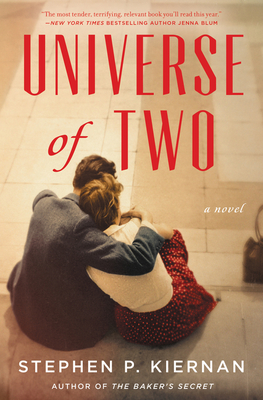 “Many people were involved in the creation of the atomic bomb in the mid-1940s, and Charles Fisk was one of them. Like many of those developmental scientists and engineers, Fisk remained deeply troubled and forever changed by the outcome of his efforts. This finely crafted love story—and a love story it is—weaves a well-researched history of the shrouded creation of the atomic bomb with the blossoming love of two people. Kiernan’s work exposes a terrifying truth and renders a valuable education while pulling the reader into a fast-paced narrative of love and loss.”
— Renee Reiner, Phoenix Books Essex, Essex Junction, VT
View the List

“Stephen Kiernan has pulled off the nearly impossible...The most tender, terrifying, relevant book you’ll read this year.” — Jenna Blum, New York Times bestselling author of Those Who Save Us and The Lost Family

“Stephen Kiernan has pulled off the nearly impossible, reminding us by wrapping a war story in a love story that although we hold the power for our own extinction, we also have the power to redeem, heal, and save. The most tender, terrifying, relevant book you’ll read this year.” — Jenna Blum, New York Times bestselling author of Those Who Save Us and The Lost Family

“Rarely does historical fiction get everything so right as Universe of Two: compelling characters, faithful detail, a story packed with unexpected twists, and a sure, authentic voice that never wavers. In this novel of the dawn of the atomic age and its profound consequences, Stephen Kiernan leads us along a journey of conscience as complex and infinite as the science itself.”  — Beatriz Williams, New York Times bestselling author of The Golden Hour

“Based loosely on the life of mathematician and organ-maker Charles B. Fisk, this fascinating novel delves into the guilt and remorse that wracked him for his part in the development of the atomic bomb. . . . The two main characters are complex and flawed, but when they come together, their world is in harmony.”
— Library Journal

“Kiernan recreates the zeitgeist of America leading up to the atomic bomb on a national and personal level: the eager anticipation of wartime’s end, the grimly fascinating science, and the growing sense of guilt and dread. Simultaneously tender and hard-hitting, this riveting story offers much to reflect upon.” — Booklist

"Charlie and Brenda's choices imply that harmony (in music and in love) can be every bit as powerful as splitting the atom. It's a history lesson contemporary leaders would do well to remember." — Seven Days