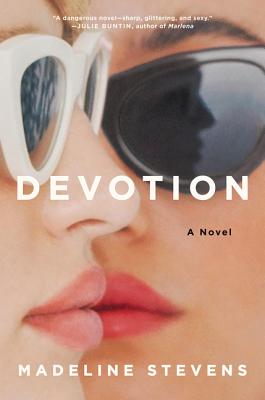 Ella is flat broke: wasting away on bodega coffee, barely making rent, seducing the occasional strange man who might buy her dinner. Unexpectedly, an Upper East Side couple named Lonnie and James rescue her from her empty bank account, offering her a job as a nanny and ushering her into their moneyed world. Ella’s days are now spent tending to the baby in their elegant brownstone or on extravagant excursions with the family. Both women are just 26—but unlike Ella, Lonnie has a doting husband and son, unmistakable artistic talent, and old family money.

Ella is mesmerized by Lonnie’s girlish affection and disregard for the normal boundaries of friendship and marriage. Convinced there must be a secret behind Lonnie’s seemingly effortless life, Ella begins sifting through her belongings, meticulously cataloguing lipstick tubes and baby teeth and scraps of writing. All the while, Ella’s resentment grows, but so does an inexplicable and dizzying attraction. Soon Ella will be immersed so deeply in her cravings—for Lonnie’s lifestyle, her attention, her lovers—that she may never come up for air.

Riveting, propulsive, and startling, Devotion is a masterful debut novel where mismatched power collides with blinding desire, incinerating our perceptions of femininity, lust, and privilege.


Praise For Devotion: A Novel…

“Sexual and class tensions merge into riveting drama, as a nannying gig for a broke, 20-something college dropout turns into something more intimate—and perhaps more sinister.... As debut novels go, Devotion is about as promising as they come.”
— Willamette Week

"A page-turner.  This psychological thriller has all the ingredients to create a tense situation rife with obsession, jealousy, lust, and betrayal....   E ach word demands to be devoured."
— New York Journal of Books

“Evocative….  Devotion pushes into territory that’s rarely covered and does so with such subtlety…. A thought-provoking novel, for sure, with rich, literary prose, and I’m hoping it helps expand the conversation on womanhood and consent, especially in the raised awareness of this #MeToo era.”
— Criminal Element

“A sense of menace grabs the reader.... The deceptively casual way in which Ella recounts reading Lonnie’s journal or taking her things builds the sense of foreboding.... [A] dark, absorbing novel..... For fans of such friendship-gone-wrong stories as Marlena by Julie Buntin and The Girls by Emma Cline.”
— Shelf Awareness (starred review)

“Devotion stages the dangerous yet mesmerizing knot made when desire wrestles envy.... This book will make your heart race. This story will make you sweat in the best way.”
— Lidia Yuknavitch, author of The Book of Joan

“Devotion is a dangerous novel—sharp, glittering, and sexy—and Madeline Stevens is a significant new talent. I read this story of obsession, friendship, and betrayal with my heart in my throat, captivated by Ella’s increasing absorption into the privileged lives of the couple who hires her.”

“Madeline Stevens has written a thrilling, evocative book about intimacy, identity, and the alien nature lodged at the heart of the people we think we know the best.”
— Alexandra Kleeman, author of You Too Can Have A Body Like Mine

“Devotion is frighteningly perceptive about the ways women see each other, use each other, hurt each other. Madeline Stevens’ debut novel dares to let jealousy and obsession lead its characters to the places we fear most.”
— Rebecca Schiff, author of The Bed Moved

“Devotion is a romance and a horror story, a tale of obsession and betrayal, revolving around two women divided by the chasm of class. In breathtaking prose, Stevens illuminates the ugly, stunning danger of love. This novel gripped me gorgeously and still won’t let me go.”
— Hannah Lillith Assadi, author of Sonora

Madeline Stevens is a writer from Boring, Oregon, currently based in Los Angeles. She holds an MFA from Columbia University and her work has been published in a variety of literary magazines. She spent seven years working as a nanny in New York City. Devotion is her first novel.