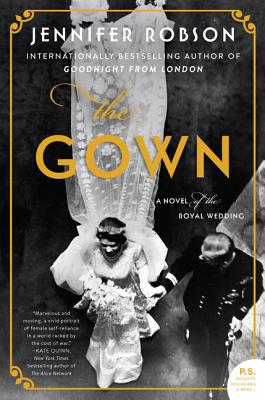 One of the most anticipated reads from InStyle, HelloGiggles, Hypable, Bookbub, and Bookriot!

One of Real Simple's Best Historical Fiction novels of the year!

Praise For The Gown: A Novel of the Royal Wedding…

much attention and resources were being focused on one day when so many were struggling to simply survive?

2. How do you think you would have coped with the difficulties of the postwar period? Would you have carried on with your “chin up,” as Ann does? Would you have danced away your cares, like some of her younger colleagues at Hartnell? Or would you have been bitter that, even after sacrificing so much, everyday life remained so hard and cheerless?

3. If you could snap your fingers and become a princess, with all of the duties and obligations and relentless attention that such a position entails, would you do it?

4. Why do you think Ann made a clean break with her past? Why did she never attempt to contact Miriam? Would you have done the same?

5. Can you close your eyes and picture Miriam’s Vél d’Hiv embroideries? What do they look like to you?

6. If you had a chance to stand in Ann’s shoes, would you tell your daughter or granddaughter the truth about your life?

7. Was Heather right to persevere in uncovering the secrets of Ann’s past?

8. Do you think it’s possible to accurately depict the life of a public figure who is still alive? And what do you think it must be like to be that public figure, and to know that strangers are reading about or watching the story of your life? Would it upset you, or would you find it entertaining to see what novelists and filmmakers get wrong—and what they get right?

9. Daniel has lines from a poem by Wilfred Owen tattooed on his arm. What poem or quote would appear in your tattoo (or on a T-shirt if you’d rather not make such a permanent gesture)?

10. What is your favorite iconic wedding gown—it doesn’t have to have

been worn by a royal bride—and why?