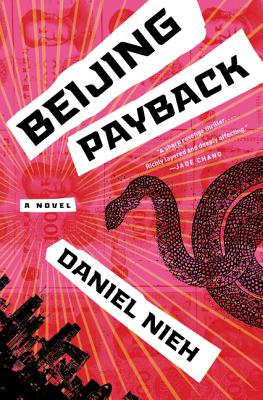 
Praise For Beijing Payback: A Novel…

“Propulsive. . . . Highly enjoyable. . . . In the lulls between high-octane fight scenes, Nieh uses the gaps in Victor’s fluency to lend realism to the experience of straddling these two worlds. . . . It sets up a sequel, one that I very much look forward to reading.” — New York Times Book Review

“Nieh, himself the son of a Chinese immigrant, has great fun twisting the trope of the immigrant-parent-with-a-devastating-past in this page turner.” — The Oregonian

“Nieh’s Victor is witty, passionate, competitive, honorable, and courageous enough to face some of the deadliest players in the Beijing underworld as he confronts his father’s past in this superb, sophisticated thriller.” — BBC.com

“Daniel Nieh deftly recasts the immigrant novel as a sharp revenge thriller. The clash between past and present, between the homeland his father escaped and the new home he dreamt up for his family, is richly layered and deeply affecting.”  — Jade Chang, bestselling author of The Wangs vs. the World

“Like his driven, basketball playing, Chinese-American hero, Daniel Nieh has got skills.  Full of revenge, treachery, intrigue, and violence, Beijing Payback also tells a compellingly human tale about the ghosts and secrets that haunt the children of immigrants.  A strong and entertaining debut.” — Sebastian Rotella, author of Rip Crew

“Beijing Payback kicks major ass. A fast moving, electric thriller that will remind you why you love the genre. I don’t know where Daniel Nieh has been hiding all of these years, but he arrives here fully formed, a writer already at the top of his game.” — Tod Goldberg, New York Times bestselling author of Gangsterland

“Beijing Payback is the best China thriller I’ve ever seen—a propulsive nail-biter that roars with seamless confidence into a China most Western authors can barely penetrate. Fun, fascinating, insightful, and unforgettable.” — Nicole Mones, author of The Last Chinese Chef and Lost in Translation

“[A] staccato-paced, character-driven thriller. . . . Readers will welcome the opportunity to follow good-guy Victor’s path of retribution and self-discovery.” — Booklist

“Remarkable. . . . This impressive blend of crime and coming-of-age marks Nieh as a talent to watch.” — Publishers Weekly (starred review)

Daniel Nieh is a writer and translator. He grew up in Portland, Oregon, and has also lived in China, Japan, Singapore, Mexico, the Netherlands, and the United Kingdom. He studied Chinese Literature at the University of Pennsylvania and the School of Oriental and African Studies, University of London.

Daniel is the author of two novels, Beijing Payback and Take No Names, of which both were Editor's Choice selections in the New York Times Book Review. Daniel's translation clients include publishers, universities, nonprofits, and museums around the world. He served as an interpreter at 2008 Beijing Olympics and also works as a contract linguist for the US Department of State. His writing has appeared in the Washington Post, the New York Times, and Esquire.