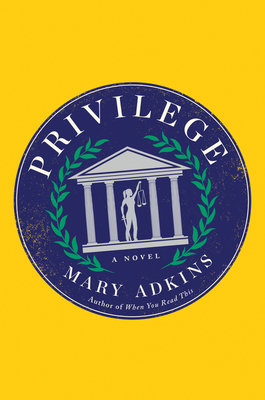 From the beloved author of When You Read This, a smart, sharply observed novel about gender and class on a contemporary Southern college campus in the spirit of The Female Persuasion and Prep.

Carter University: “The Harvard of the South.”

Annie Stoddard was the smartest girl in her small public high school in Georgia, but now that she’s at Carter, it feels like she’s got “Scholarship Student” written on her forehead.

Bea Powers put aside misgivings about attending college in the South as a biracial student to take part in Carter’s Justice Scholars program. But even within that rarefied circle of people trying to change the world, it seems everyone has a different idea of what justice is.

Stayja York goes to Carter every day, too, but she isn’t a student. She works at the Coffee Bean, doling out almond milk lattes to entitled co-eds, while trying to put out fires on the home front and save for her own education.

Their three lives intersect unexpectedly when Annie accuses fourth-year student Tyler Brand of sexual assault. Once Bea is assigned as Tyler’s student advocate, the girls find themselves on opposite sides as battle lines are drawn across the picture-perfect campus—and Stayja finds herself invested in the case’s outcome, too.

Told through the viewpoints of Annie, Bea, and Stayja, Privilege is a bracingly clear-eyed look at today’s campus politics, and a riveting story of three young women making their way in a world not built for them.


Praise For Privilege: A Novel…

"I love a good college campus scandal and Adkins delivered in her latest novel." — Today.com,  "7 Of the Best Beach Reads of the Summer"

"The lives of three young women intersect when fourth-year student Tyler Brand is accused of sexual assault." — New York Post, "The Best Books of the Week"

“Adkins' writing provides a multifaceted portrayal of campus life and politics in the #MeToo era. . . . A timely and resonant novel." — Kirkus Reviews

“A gripping novel. . .  . Adkins allows readers to take in all sides and perspectives, provoking much thought, and explores the university's failure to protect students from privilege of many forms." — Booklist

Praise for When You Read This: “Fans of Where'd You Go, Bernadette will love this. . . a bittersweet, often funny novel about hope, memory, and loose ends.”

“It’s a risk to write a hilarious novel about grief and regret. It’s a bigger risk to tell the story solely through virtual communication. Mary Adkins succeeds on both fronts in this epistolary novel . . . . A story of flawed people who have connected under the worst of circumstances. It’s a quick, worthwhile read.” — Minneapolis Star Tribune

Mary Adkins is the author of When You Read This, Privilege, and Palm Beach. A native of the American South and a graduate of Duke University and Yale Law School, her writing has appeared in the New York Times and the Atlantic. She also teaches storytelling for The Moth. She lives in Nashville, Tennessee.