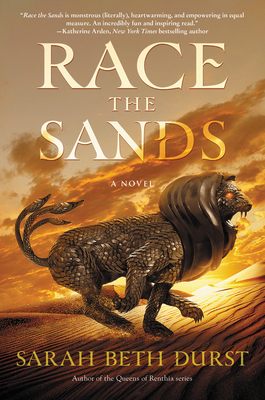 “National Velvet with monsters and a big helping of palace intrigue, Race the Sands is monstrous (literally), heartwarming, and empowering in equal measure. An incredibly fun and inspiring read.” – Katherine Arden, New York Times bestselling author of The Bear and the Nightingale

In this epic standalone fantasy, the acclaimed author of the Queens of Renthia series introduces an imaginative new world in which a pair of strong and determined women risk their lives battling injustice, corruption, and deadly enemies in their quest to become monster racing champions.

Life, death, and rebirth—in Becar, who you are in this life will determine your next life. Yet there is hope—you can change your destiny with the choices you make. But for the darkest individuals, there is no redemption: you come back as a kehok, a monster, and are doomed to be a kehok for the rest of time.

Unless you can win the Races.

After a celebrated career as an elite kehok rider, Tamra became a professional trainer. Then a tragic accident shattered her confidence, damaged her reputation, and left her nearly broke. Now, she needs the prize money to prevent the local temple from taking her daughter away from her, and that means she must once again find a winning kehok . . . and a rider willing to trust her.

Raia is desperate to get away from her domineering family and cruel fiancé. As a kehok rider, she could earn enough to buy her freedom. But she needs a first-rate trainer.

Impressed by the inexperienced young woman’s determination, Tamra hires Raia and pairs her with a strange new kehok with the potential to win—if he can be tamed.

But in this sport, if you forget you’re riding on the back of a monster, you die. Tamra and Raia will work harder than they ever thought possible to win the deadly Becaran Races—and in the process, discover what makes this particular kehok so special.

Sarah Beth Durst is the award-winning author of sixteen fantasy books for adults, teens, and kids, including The Queens of Renthia series, Drink Slay Love, and The Stone Girl’s Story. She won an ALA Alex Award and a Mythopoeic Fantasy Award, and has been a finalist for SFWA's Andre Norton Award three times. She is a graduate of Princeton University, where she spent four years studying English, writing about dragons, and wondering what the campus gargoyles would say if they could talk. Sarah lives in Stony Brook, New York, with her husband, her children, and her ill-mannered cat. For more information, visit her at sarahbethdurst.com.


Praise For Race the Sands: A Novel…

“National Velvet with monsters and a big helping of palace intrigue, Race the Sands is monstrous (literally), heartwarming, and empowering in equal measure. An incredibly fun and inspiring read.”
— Katherine Arden, New York Times bestselling author of The Bear and The Nightingale

“Sarah Beth Durst is one of the most prolific authors I know, yet each of her beautiful stories is infused with exciting action and fully rounded characters whose struggles are both relatable and fantastical. Race the Sands is a fast-paced adventure that will have you falling in love with its heroines and the monsters they ride.”
— Peter V. Brett, New York Times bestselling author of The Demon Cycle?

"RACE THE SANDS is not only a blistering rush through a brilliantly credible and original fantasy landscape, it's the story of resolve, family, and personal destiny we all need. Highly recommended."
— Julie E. Czerneda, author of THE GOSSAMER MAGE

"Race The Sands is a rousing standalone fantasy adventure....If you're in the mood for monsters or racing or a primarily female cast surviving against all odds, Race The Sands delivers on all counts, in one delightful package that doesn't require a series commitment!"
— Fantasy Book Critic