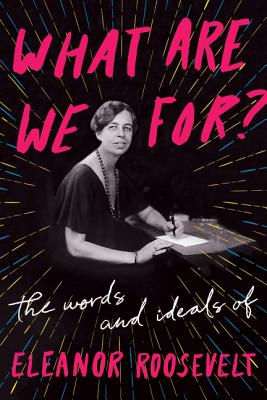 What Are We For?

The Words and Ideals of Eleanor Roosevelt

From one of the world’s most celebrated and admired public figures, Eleanor Roosevelt, a collection of her most treasured sayings—the perfect gift for Mother’s Day, graduation, and a new generation of feminists.

With a foreword by Speaker Nancy Pelosi

No one can make you feel inferior without your consent. We’ve all heard this powerful Eleanor Roosevelt adage—it is, perhaps, one of her best known. A wise leader, she knew the power of words, and throughout her work as First Lady, a UN representative, and advocate for human rights, women, youth, minorities, and workers, she was a prolific writer and speaker.

Eleanor’s wise words on government, race and ethnicity, freedom, democracy, economics, women and gender, faith, children, war, peace, and our everyday lives leap off the page in memorable quotations such as:

·       Progress is rarely achieved by indifference.

·       I am convinced that every effort must be made in childhood to teach the young to use their own minds. For one thing is sure: If they don’t make up their minds, someone will do it for them.

·       Unless people are willing to face the unfamiliar they cannot be creative in any sense, for creativity always means the doing of the unfamiliar, the breaking of new ground.

…and these are just a few.

At this politically and culturally divided moment in our nation’s history, Eleanor Roosevelt’s quotes have an even deeper resonance—as moving and insightful as they are timely. What Are We For? is a celebration of a cultural icon, and a powerful reminder of Eleanor Roosevelt’s extraordinary contributions to our country, and the world.