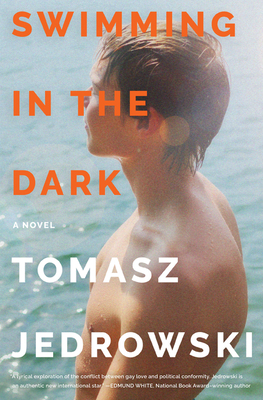 Swimming in the Dark

“Imagine Call Me By Your Name set in Communist Poland and you'll get a sense of Jedrowski's moving debut about a consuming love affair amidst a country being torn apart.”  — O, The Oprah Magazine

“Captivating both for its shimmering surfaces and its terrifying depths. Tomasz Jedrowski is a remarkable writer.”  — Justin Torres, bestselling author of We the Animals

Set in early 1980s Poland against the violent decline of Communism, a tender and passionate story of first love between two young men who eventually find themselves on opposite sides of the political divide—a stunningly poetic and heartrending literary debut for fans of André Aciman, Garth Greenwell, and Alan Hollinghurst.

When university student Ludwik meets Janusz at a summer agricultural camp, he is fascinated yet wary of this hand­some, carefree stranger. But a chance meeting by the river soon becomes an intense, exhilarating, and all-consuming affair. After their camp duties are ful­filled, the pair spend a dreamlike few weeks in the countryside, bonding over an illicit copy of James Baldwin’s Giovanni’s Room. Inhabiting a beautiful, natural world removed from society and its con­straints, Ludwik and Janusz fall deeply in love. But in their repressive Communist and Catholic society, the passion they share is utterly unthinkable.

Once they return to Warsaw, the charismatic Janusz quickly rises in the political ranks of the party and is rewarded with a highly coveted government position. Ludwik is drawn toward impulsive acts of protest, unable to ignore rising food prices and the stark economic disparity around them. Their secret love and personal and political differences slowly begin to tear them apart as both men struggle to survive in a regime on the brink of collapse.

Shifting from the intoxication of first love to the quiet melancholy of growing up and growing apart, Swimming in the Dark is a potent blend of romance, postwar politics, intrigue, and history. Lyrical and sensual, immersive and intense, Tomasz Jedrowski’s indelible and thought-provoking literary debut explores freedom and love in all its incarnations.


Praise For Swimming in the Dark: A Novel…

“An affecting and unusual romance, with a political undercurrent . . . . Jedrowski writes elegantly and evokes the emotional honesty that the lovers first thrive in, and then the grimly repressive machinery of the [Polish United Workers' Party].” — The Guardian

“[A] devastating debut novel . . . Worker revolts and brutal government crackdown form the backdrop to Ludwik’s search for love and possibility while living in fear of being discovered. Jedrowski’s prose captures the strain of such desires, alongside heady moments of freedom.” — Interview Magazine

"This is a lyrical exploration of the conflict between gay love and political conformity. Jedrowski is an authentic new international star." — Edmund White, award-winning author of Our Young Man

"Marvelous, precise, poignant writing; the reader is happy to be overwhelmed. The highest talent at work." — Sebastian Barry, award-winning author of Days Without End

“A remarkable, beautiful tale . . . [that] is consonant with many of the traditions of gay fiction, yet is also utterly new and entirely credible . . . This book radiates sensuality, humour, and human truths . . . The reader is left wanting more. You won’t want to miss it.”  — Literary Review (UK)

“Jedrowski has woven a brilliant tale about two people in love who are torn apart by a political divide and a difference in values. . . . A tender, sad, and moving love story . . . full of suspenseful intrigue, conflict, and passion.” — The Gay & Lesbian Review

“In this glorious book, Jedrowski exquisitely captures the pleasure and pain of young love, while reminding us of what it means to hunger: for freedom – and for another.” — The Independent, 11 Best LGBTQ+ Books to Read During Pride Month and Beyond

“Remember the feeling of the last day of summer camp? Nostalgia for something you haven’t quite lost yet? Tomasz Jedrowski captures that wistfulness in his debut novel . . . Jedrowski’s writing reminds us that even in the face of oppression, life continues.” — Ari Shapiro, NPR, Book Concierge

Tomasz Jedrowski is a graduate of Cambridge University and the Université de Paris. Born in Germany to Polish parents, he has lived in several countries, including Poland, and currently resides outside Paris. This is his first novel.