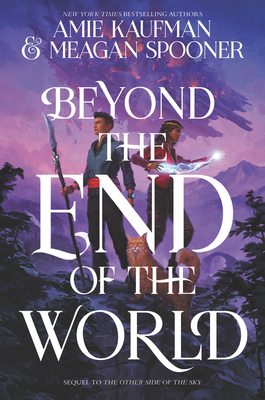 Beyond the End of the World

Perfect for fans of Brandon Sanderson and Laini Taylor, this much-anticipated sequel to New York Times bestselling authors Amie Kaufman and Meagan Spooner’s The Other Side of the Sky is a thrilling race against time—with a tantalizing star-crossed love and an electric conclusion.

Above, in the cloudlands, Nimh has no memory of her past, only an aching, undying certainty that she has left something—someone—behind. But while she struggles to recall her identity, an imposter wields her name with deadly purpose.

Below, on the surface, North looks to the sky, desperate to join the person he loves and return to his world. But with only a traitor willing to help him, and others clamoring for him to take Nimh’s place, his home seems more unreachable than ever.

Tragedy looms as the cloudland engines falter and mist rains terror on the surface, and in their desperation to reunite and save their people, Nimh and North face one ultimate question: can they defy their love and their destiny to save their homes?

Or will the spark between them ignite their worlds, and consume them all together?

Praise for The Other Side of the Sky:

“A vivid and compulsive thriller set in a beautiful, perilous world of myths and treachery. You won’t want to put it down.”   —Laini Taylor, New York Times bestselling author of the Daughter of Smoke and Bone series

“I was left breathless by the book’s twists and turns, and was unprepared for the ending—it blew me away. Stop everything and read it!” —C. S. Pacat, bestselling author of Dark Rise

“A book that absolutely shimmers with beauty.”   —Buzzfeed


Praise For Beyond the End of the World…

Praise for The Other Side of the Sky: “A vivid and compulsive thriller set in a beautiful, perilous world of myths and treachery. You won’t want to put it down.” — Laini Taylor, New York Times bestselling author of the Daughter of Smoke and Bone series

“I was left breathless by the book’s twists and turns, and was unprepared for the ending—it blew me away. Stop everything and read it!” — C. S. PACAT, bestselling author of the Captive Prince series

“Kaufman and Spooner, who also collaborated on the Starbound Trilogy, return with another richly drawn, tantalizingly romantic sf series starter. An especially action-packed back half will ensure readers come running back for the next volume.”  — Booklist

“A complex, intricately woven tale, placed in an intriguing and unique world. This passionate story will thrill devotees of Kaufman and Spooner’s “Starbound” series while also appealing to fans of Naomi Novik, Marissa Meyer, and Claudia Gray.” — School Library Journal

Praise for Amie Kaufman and Meagan Spooner’s STARBOUND series:
“Absolutely brilliant. This is the sci fi I’ve been waiting for!”

“One of the most intense, thrilling, and achingly beautiful stories I’ve ever read. Kaufman and Spooner will break your heart with skilled aplomb, and you’ll thank them for it. Absolutely incredible! If I have to, I will come to your house and shove this book into your hands.” — Marie Lu, New York Times best-selling author of the Legend trilogy

“With rich, complex characters and a dynamic—and dangerous—new world, THESE BROKEN STARS completely transported me.”  — Jodi Meadows, author of the Incarnate series

“These Broken Stars is at its heart a love story. Voiced in alternate chapters, Lilac and Tarver are characters of depth, complexity, and strength, young people who alternately elicit the reader’s admiration, frustration, and sympathy. While the book is the first of a promised trilogy, it stands on its own as a testament to love, loyalty, courage, and the power of good over dystopian greed and perversity.”  — ALA Booklist (starred review)

“Kaufman and Spooner couple an epic romance with dazzling science fiction in a tale that will appeal to lovers of both genres. This is a must-read.” 5Q (Quality rating of 5/5), Best Science Fiction, Fantasy & Horror List, 2013. — Voice of Youth Advocates (VOYA)

“First-time author Kaufman and coauthor Spooner begin their science-fiction romance in familiar territory and then chart a course that goes to new heights … a wonderful tale that should appeal to both teen and adult readers.” — School Library Journal

“Strange visions and apparitions give the story a chilling edge, and a late revelation elevates these developments into entirely new territory. In a collaboration that, at times, evokes Lost, Titanic, and Romancing the Stone, Spooner (Skylark) and newcomer Kaufman do an excellent job of keeping their story from falling into clichéd romantic territory … the external conflicts and underlying mysteries will keep readers guessing (and turning the pages).” — Publishers Weekly

Amie Kaufman is a New York Times and internationally bestselling author of young adult and middle grade fiction, and the host of the podcast Amie Kaufman on Writing. Her multi-award winning work is slated for publication in over 30 countries, and has been described as “a game-changer” (Shelf Awareness), “stylistically mesmerising” (Publishers Weekly) and “out-of-this-world awesome” (Kirkus). Her series include The Illuminae Files, The Aurora Cycle, The Other Side of the Sky duology, the Starbound trilogy, the Unearthed duology, the Elementals trilogy, and The World Between Blinks. Her work is in development for film and TV, and has taken home multiple Aurealis Awards, an ABIA, a Gold Inky, made multiple best-of lists and been shortlisted for the Prime Minister’s Literary Awards. Raised in Australia and occasionally Ireland, Amie has degrees in history, literature, law and conflict resolution, and is currently undertaking a PhD in Creative Writing. She lives in Melbourne with her husband, daughter, and rescue dog, and an extremely large personal library. Learn more about her and subscribe to her newsletter at www.amiekaufman.com

New York Times bestselling author Meagan Spooner grew up reading and writing every spare moment of the day while dreaming about life as an archaeologist, a marine biologist, or an astronaut. She graduated from Hamilton College in New York State with a degree in playwriting. She’s traveled all over the world, to places such as Egypt, Australia, South Africa, the Arctic, Greece, Antarctica, and the Galápagos Islands, and there’s a bit of every trip in every story she writes. She currently lives and writes in Asheville, North Carolina, but the siren call of travel is hard to resist, and there’s no telling how long she’ll stay there. She’s the coauthor of the award-winning Starbound Trilogy (These Broken Stars, This Shattered World, Their Fractured Light) and the Skylark Trilogy (Skylark, Shadowlark, Lark Ascending) as well as this “Beauty and the Beast” retelling. In her spare time she plays guitar, plays video games, plays with her cat, and reads. www.meaganspooner.com